A new poll from Rasmussen indicates that almost two-thirds of Americans believe that “progressive activists” will “respond with violence” in the event that President Donald Trump secures reelection in November. 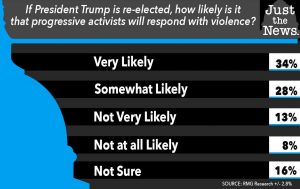 The national poll, released Thursday, surveyed 1,200 registered voters. It was conducted on July 23rd to 25th.

In a sharp contrast, only a combined total of 38% of voters predicted that conservative activists would become violent in the event of a Joe Biden victory, with 16% of the public seeing it as very likely and 22% seeing it as somewhat likely.

“It is interesting to note that last week more people thought Republicans would cheat rather than Democrats,” said Rasmussen, referring to a previous poll suggesting that more people thought it was possible Republicans would “cheat” as opposed to Democrats. “This week, the partisan gap is wider and reversed. Sixty-two percent (62%) expect violence from progressives if Trump wins, but only 38% see violence from conservatives as likely if Biden wins.”