It appears as though antifa and their affiliated terrorist organizations have successfully established a Portland autonomous zone in the blocks around the now-famous Red House after running off police and sheriffs who had a judges order to evict a family from their foreclosed home on Tuesday morning. Hundreds of protesters have now shown up to hold the area. They’ve set up fortified barricades and have established check points at the entrances. This is despite vichy “mayor” Ted Wheeler vowing to not allow an autonomous zone and authorizing police to use whatever tools necessary to prevent such from happening.

I am authorizing the Portland Police to use all lawful means to end the illegal occupation on North Mississippi Avenue and to hold those violating our community’s laws accountable. There will be no autonomous zone in Portland.

The pretend “police” have declared the area a no-go zone.

This is the area affected by an occupation in the Humboldt neighborhood. Streets are barricaded and there are reports of aggressive behavior by people involved. If at all possible, please avoid the area. Those with homes and businesses here, please use caution. pic.twitter.com/cXXzkXUwhS

Here’s an overhead shot of the occupied zone: 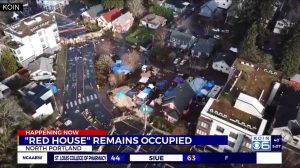