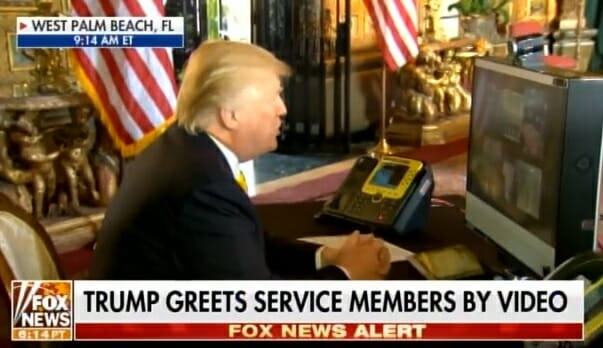 President Trump greeted the troops by video in Afghanistan, Iraq and the Arabian Gulf on Thanksgiving morning.

The president spoke to the troops to thank them for their service.

President Trump: We totally support you. In fact, we love you. We really do. We love you. And this is a Thanksgiving you won’t forget. You’re in a very different part of the world that you’re used to but boy are you doing a job there. And thank God for you. We also want to give thanks to our loved ones. Our amazing military families. I know they miss you and they miss you so deeply and badly there… And again, I’m gonna now, I’m surrounded by reporters and press and I’m going to ask them to leave and we’re going to have very confidential personal conversations. We’re set up for that.

President Trump then kicked reporters out of the room so he could speak with the troops personally and privately.

The president is spending Thanksgiving at his home in Mar-a-lago this year.

.@POTUS to troops: overseas "I have to say directly to all of the folks over in Afghanistan, everyone's talking about the progress you've made in the last few months." pic.twitter.com/PTEtlvqmYl