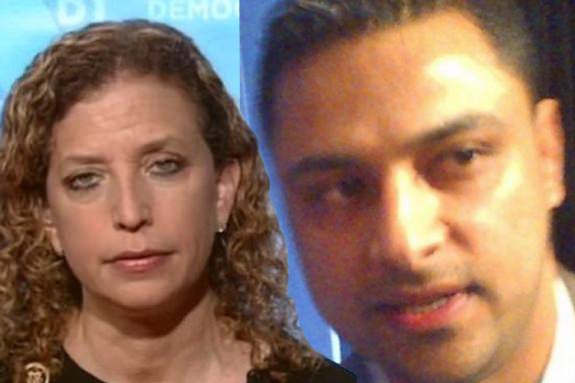 If you’re playing catch-up on this burgeoning scandal, read Andy McCarthy’s summary, and these details of Debbie Wasserman Schultz’s bizarre behavior throughout the imbroglio — including refusing to fire the staffers even after it was clear that they were under FBI investigation, then shifting her tone and story regarding her obsession with a confiscated laptop.  She played the crude ‘Islamophobia’ card in an attempt to explain away her actions vis-a-vis her Pakistani-American staffers, but that spin both ignored the mounting evidence against them and smeared fellow Congressional Democrats who severed ties with the team once the federal probe came to light.  A fresh report from the New York Post quotes sources who say investigators are now looking into whether the Awan cabal sold stolen data from Congressional offices to foreign intelligence services.  The second country named is likely to raise eyebrows:

Federal authorities are investigating whether sensitive data was stolen from congressional offices by several Pakistani-American tech staffers and sold to Pakistani or Russian intelligence, knowledgeable sources say. What started out 16 months ago as a scandal involving the alleged theft of computer equipment from Congress has turned into a national-security investigation involving FBI surveillance of the suspects. Investigators now suspect that sensitive US government data — possibly including classified information — could have been compromised and may have been sold to hostile foreign governments that could use it to blackmail members of Congress or even put their lives at risk. “This is a massive, massive scandal,” a senior US official familiar with the widening probe told The Post…During the probe, investigators found valuable government data that is believed to have been taken from the network and placed on offsite servers, setting off more alarms. Some 80 offices were potentially compromised. Most lawmakers fired the alleged “ringleader” — longtime IT staffer Imran Awan — in February. But Florida Rep. Debbie Wasserman Schultz, the former Democratic National Committee chief, kept Awan on her payroll until his arrest last month on seemingly unrelated charges of defrauding the congressional credit union. For more than a decade, Awan, his wife, two relatives and a friend worked for 30 House Democrats. They included New York City pols Gregory Meeks, Joseph Crowley and Yvette Clarke and members of the sensitive Intelligence and Foreign Relations committees.

Here is what may — I repeat, may — become a key piece of the puzzle:

Awan had access to Wasserman Schultz’s e-mails at both Congress and the DNC, where he had been given the password to her iPad. After DNC e-mails and research files were stolen during the presidential election, Wasserman Schultz reportedly refused to turn over the server to the FBI and instead called in a private firm to investigate and ID the hackers. The firm blamed the Russian government, while admitting, “We don’t have hard evidence.” The corrupted DNC server, held in storage, still has not been examined by the FBI. Wasserman Schultz denies the DNC turned down the FBI’s assistance or that her congressional or DNC e-mails were compromised by Awan. “This whole investigation pivots off Debbie Wasserman Schultz,” the official said. “It’s clear that large bytes of data were moved off the secure network,” said another source close to the investigation, adding that Awan and the other four staffers under investigation had “full and complete access” to lawmakers’ e-mails, calendars, schedules, hearing notes, meeting notes and memos and other sensitive information…“Logic dictates that sensitive data was compromised,” the senior official speculated. “An accused criminal with close ties to Pakistan had full and complete control over data that went out over the network.”

The four relevant US intelligence agencies all concur that the Russian government meddled in the 2016 presidential election, for the express purpose of helping to defeat Hillary Clinton — or at least undermine her legitimacy after she won, as Moscow expected she would.  But if the Post’s sources are correct, the feds are now examining whether the Kremlin may have had some inside assistance from Democratic staffers who had access to reams of information.  And if there’s a ‘Russiagate’ tie-in here, the FBI should ensure that Mueller’s team knows all about it.  Two big “if’s,” but I’ve said all along that the probe ought to chase all of the evidence, wherever it may lead.  Plus, even if there’s no connection to Moscow established here, questions about DWS’ actions will keep swirling.  For instance, how and why these people were hired in the first place, and why they were paid so much, considering glaring underqualification issues:

The Democrats who hired the five suspects apparently did a poor job vetting them. Awan’s brother Abid had a rap sheet with multiple offenses, including a conviction for DWI a month before he was hired, and filed for bankruptcy in 2012. Most had relatively little IT experience. Yet they hauled in a combined $4 million-plus over the past decade. One, a former McDonald’s worker, was suddenly making as much as a chief of staff. On Thursday, a federal grand jury indicted Imran Awan on four seemingly unrelated felony counts including bank fraud, conspiracy and making false statements. They also indicted his wife, Hina Alvi. FBI agents seized hard drives and other evidence from their Virginia home. The indictment says the couple wired close to $300,000 in fraudulently obtained funds to Pakistan in January, as the Capitol Police investigation heated up. FBI agents last month collared Awan, 37, at the Dulles International Airport airport as he tried to board a flight to Pakistan. Alvi, 33, fled to Pakistan in March.

I’ll leave you with the latest filing from the Daily Caller’s Luke Rosiak, who has been all over this saga from the very beginning:

Why did Democrats do very sketchy things to enable Awan’s crew for years?  And as you read that piece — go all the way to the end — it’s totally mystifying how these individuals landed their Congressional IT jobs at all. Who thought it was a good idea to grant these people access to a wide network of sensitive information? Was there a blackmail component at play? Stay tuned.