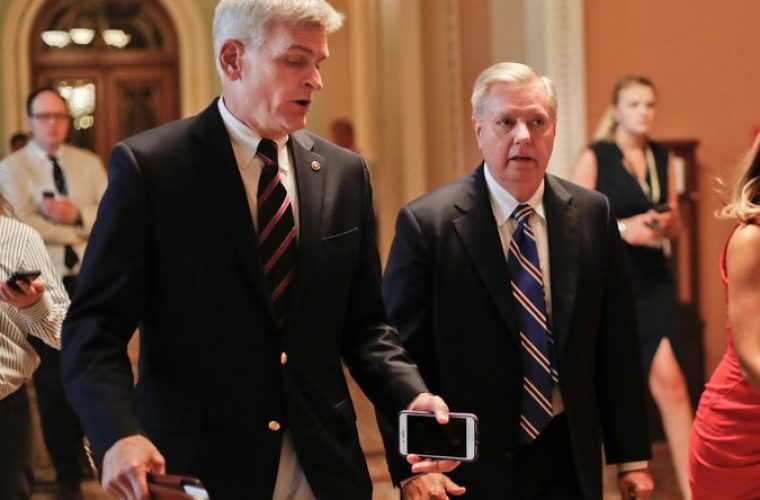 President Donald Trump is encouraging the Senate to pass a bill proposed by Republican Sens. Lindsey Graham (S.C.) and Bill Cassidy (La.) to repeal and replace Obamacare, and one administration official said Tuesday that Trump will sign the legislation if it makes it to his desk.

A White House official told CNN that Trump wants the opportunity to sign the Graham-Cassidy bill, which would replace the federal structure of Obamacare with block grants for states. Its backers have until Sept. 30 to win over enough Republican senators to pass the legislation by a simple majority, before the GOP will need Democratic support to do so.

Trump has called lawmakers urging them to support the bill, saying this could be their last chance to fulfill the promise to repeal and replace Obamacare. According to White House pool reports, Trump even called Graham at 10:30 p.m. Monday night to emphasize the importance of passing the bill.

If Republicans do not pass it by Sept. 30, they would lose the chance to use the reconciliation process to overhaul Obamacare by a simple majority. House Speaker Paul Ryan (R., Wis.) said he plans to bring the bill to the House floor if it passes the Senate.

“I am encouraging every senator to vote for Graham-Cassidy, because it is our best, last chance to get repeal and replace done,” Ryan said Monday.

“And I do believe it is a far greater improvement over the status quo,” Ryan added. “I’ll take [the] federalism of Graham-Cassidy over a collapsing Obamacare system any day.”

At the center of the Obamacare drama are again Republican Sens. Lisa Murkowski (Alaska), Rand Paul (Ky.), John McCain (Ariz), and Susan Collins (Maine). The so-called skinny repeal plan was defeated in July with McCain’s last-second vote in opposition to it, preventing the 50-vote threshold needed to force a tie-breaking vote by Vice President Mike Pence.

Pence has also been on Capitol Hill strongly lobbying senators to support the Graham-Cassidy plan, saying every Republican should vote for it.

“This is the moment,” Axios reports him saying of the bill. “Now is the time.”

The bill has garnered a broad range of support that Graham has expressed pride in, with former White House chief strategist Steve Bannon even supporting it.

“I have got Alan Greenspan, Jeb Bush, and Steve Bannon” Graham told reporters. “If anyone can do better I’d like to meet them.”

Trump’s support comes after he expressed frustration at Republicans’ multiple failed attempts to repeal Obamacare this year. He said focusing on health care in the face of a potential Democratic filibuster would be a “death wish,” and advised them to move onto tax reform.

Passing the bill does pose serious challenges. The Congressional Budget Office will not be able to fully review it before the Sept. 30 deadline, while Paul has come out strongly against it and Collins has expressed concerns. McCain and Murkowski are staying quiet about the bill for now.

Meanwhile, Democrats are generally sticking to the point that Obamacare needs to be fixed, rather than replaced.

“We need to repair it,” Sen. Claire McCaskill (D., Mo.) said Tuesday. “We need to make it stronger.”