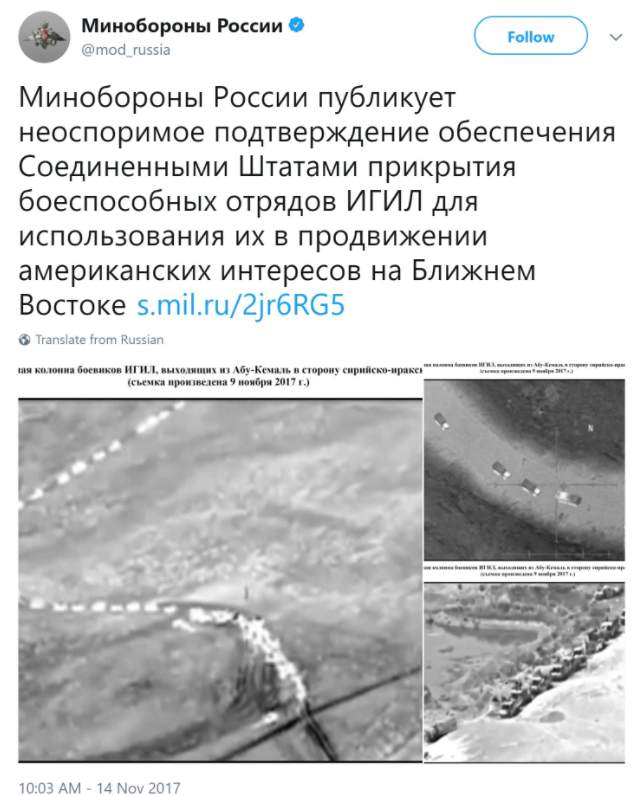 The Russian Defense Ministry on Tuesday accused U.S. military forces of cooperating with ISIS against Syrian troops, but its evidence was a screenshot from a video game.

The Facebook post included five pictures purporting to be evidence of U.S. actions, and one of them was a screenshot from the mobile phone video game “AC-130 Gunship Simulator: Special Ops Squadron,” the Guardian reported. Investigators at Conflict Intelligence Team, which checks the accuracy of the Russian military’s claims, pointed out the video game screenshot and also determined that the other photos were from the Iraqi Ministry of Defense in 2016.

“Twitter users quickly found out that 4 out of 5 ‘drone photos’ were actually taken from videos released by the Iraqi Ministry of Defense in June 2016, showing the Iraqi Air Force bombing IS near Fallujah,” Conflict Intelligence Team wrote in a post. “Another photo was taken from a mobile game ‘AC-130 Gunship Simulator: Special Ops Squadron.'”

The Russian Defense Ministry has changed the pictures in its public post, but Conflict Intelligence Team linked to an archive of the post.

The Russian Defense Ministry touted the quality of their evidence in a long post making the accusation, which can still be accessed, now with different pictures.

“The operation ascertained facts of direct cooperation and support provided by the US-led coalition to the ISIS terrorists,” the Russian Defense Ministry announced.

“This is the irrefutable evidence that there is no struggle against terrorism as the whole global community believes,” the Russian Defense Ministry added. “The US are actually covering the ISIS combat units to recover their combat capabilities, redeploy, and use them to promote the American interests in the Middle East.”