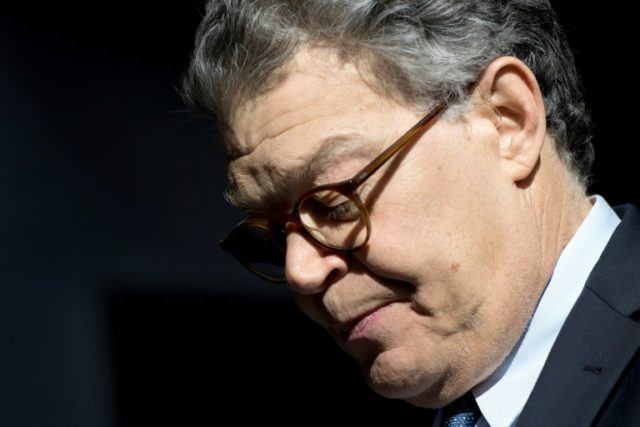 Democrats push the senator over the cliff in hopes of defeating Roy Moore.

With Democrat cutlasses poking his back, Al Franken, the junior senator from Minnesota who can’t keep his hands to himself, has reluctantly walked the plank to boost his party’s image after eight women accused him of sexual misconduct.

The most prominent accuser is radio host Leeann Tweeden who claims the professional vulgarian who has a long, well-documented track record of making crude remarks about sexually assaulting women, kissed and groped her without her consent.

Franken’s speech under duress on the Senate floor yesterday was defiant and bursting with self-pity. Only a true believer would take it seriously. Franken certainly did not. He wouldn’t even commit to a specific resignation date, saying only that he would leave office in the coming weeks, a non-binding promise if ever there was one.

Democrats made Franken retire from public life because it makes sense to do so, according to their cold, business-like calculus for this kind of thing. A decision was made in senior Democrat circles to offer up Franken as a sacrificial lamb to give the party a chance after so many sex-related scandals, to reposition itself in the public eye as champions of women. With the Dec. 12 vote in the Senate race in Alabama between Republican Roy Moore and Democrat Doug Jones approaching, there is no time to waste.

And it costs Democrats little to jettison Franken. They do this knowing that the governor of Minnesota is Mark Dayton, a Democrat who will appoint a Democrat caretaker senator. Frighteningly, jihadist-socialist Rep. Keith Ellison (D-Minn.) is being discussed as a Franken replacement.

But even if this choreographed contrition fails to get Jones elected down in Dixie, Democrats are optimistic they can make Moore the new face of the Republican Party in 2018 and 2020. Maybe they could parlay Franken’s self-immolation into the impeachment of President Trump. Of course, painting Donald Trump as a big time sexual harasser and worse last year didn’t stop him from winning the election, but left-wingers, the very people who invented sexual harassment, are nothing if not persistent.

It is difficult to feel sorry for Franken, especially after he cheated his way into office.

Franken stole the 2008 election from incumbent Norm Coleman (R), with the assistance of ACORN-aligned Minnesota Secretary of State Mark Ritchie (D), a former community organizer. As a protracted recount took place, Franken improbably went from a deficit of hundreds of votes to a surplus months after Election Day, which, according to an analysis at the time, was highly improbable, if not statistically impossible. How hundreds of Franken votes materialized out of thin air has never been properly explained. Illegally cast votes from felons also helped get Franken past the finish line in his first election.

As Michael Stokes Paulsen, professor of law at the University of St. Thomas in Minneapolis, wrote at the time, “Minnesota is Bush v. Gore reloaded. The details differ, but not in terms of arbitrariness, lack of uniform standards, inconsistency in how local recounts were conducted and counted, and strange state court decisions.”

The Franken saga is the latest in a still-expanding mushroom cloud of allegations of sexual abuse hurled largely at left-wing elite political, media, and entertainment figures. There are rumors circulating on Capitol Hill that another three dozen or more lawmakers will soon face sexual misconduct allegations.

And to distract from all the Democrats being taken down over sexual allegations, the mainstream media is doing a full-court press to revive the all-too-convenient sexual misconduct allegations against President Trump that suddenly surfaced in the closing days of last year’s election cycle.

One of those Democrats is Rep. John Conyers of Michigan, who used government funds to pay off an accuser. He isn’t seeking reelection now that he has decided to turn his congressional seat into a hereditary peerage belonging to the House of Conyers.

In his speech in the Senate yesterday in which Franken said “all women deserve to be heard,” he did not apologize to those women accusing him of the sexual misconduct that led him to announce his resignation.

His apology would have been worthless, anyway. After a previous incident when he apologized for his awful behavior he later admitted the apology was fake.

As a writer for “Saturday Night Live,” Franken was working on a skit that involved drugging and raping CBS reporter Lesley Stahl.

“’I give the pills to Lesley Stahl. Then when Lesley is passed out, I take her to the closet and rape her.’ Or ‘That’s why you never see Lesley until February.’ Or, ‘When she passes out. I put her in various positions and take pictures of her,’” Franken was quoted saying in a 1995 New York magazine article.

But in his recent book, Al Franken: Giant of the Senate, he wrote that he faked the apology so he wouldn’t mess up his political career.

“To say I was sorry for writing a joke was to sell out my career, to sell out who I’d been my entire life,” he wrote. “And I wasn’t sorry that I had written Porn-o-Rama or pitched that stupid Lesley Stahl joke at 2 in the morning. I was just doing my job.”

“I learned that campaigns have their own rules, their own laws of physics, and that if I wasn’t willing to accept that, I would never get to be a senator,” he added.

I of all people am aware there is some irony in the fact I am leaving while a man who has bragged on tape about his history of sexual assault sits in the Oval Office and a man who has repeatedly preyed on young girls campaigns for the Senate with the full support of his party.

In fact President Trump has never acknowledged committing sexual assault. In the old “Access Hollywood” recordings that surfaced during last year’s election cycle, Trump engaged in vulgar locker room talk with Billy Bush, saying in essence that when you’re a rich and famous man seducing women is easy. This banal observation is not exactly a sentiment for which Trump should be commended, but it is not sexual assault or harassment, either.

As to the reference to Alabama Senate candidate Roy Moore supposedly preying on young girls, the all-too-convenient allegations from four decades ago have not been proven and although evidence may yet surface damning Moore, the former judge denies doing anything wrong. Part of the left-wing attack squad, feminist ambulance-chaser Gloria Allred has already produced what appears to be a forged signature and inscription from Moore on a young woman’s high school yearbook. In the statement Moore offers polite, non-incriminating compliments. Even if the yearbook statement turned out to be authentic, it would merely be evidence of Moore’s Southern courtesy.

The above sentence from Franken’s speech in particular telegraphs the entirety of what will be Democrats’ 2018 and 2020 campaign platforms should Moore win on Dec. 12. Despite having standard-bearers like serial sexual predator and credibly accused rapist Bill Clinton, former Rep. Barney Frank who allowed his boyfriend to run a brothel out of his apartment, and legendary lady-killer Sen. Edward Kennedy, Democrats intend to whitewash their own party’s history. And let’s not leave former Vice President Joe Biden, whose inappropriate touching of women is exhaustively photographically documented, off the list. (Who can forget that campaign trail photo in which flirtatious Biden looks like he’s about to get flattened by a jealous biker in a diner because his girlfriend is practically sitting in Biden’s lap?)

Meanwhile, conservative champion Rep. Trent Franks (R-Ariz.) unexpectedly announced his resignation last night, effective Jan. 31 in the new year. If the reason for his departure stated in a Washington Times article is correct, it appears Franks is being railroaded by GOP leadership for the sake of crass political expediency.

Franks and his wife have dealt with infertility by having twins through a surrogate mother, and he acknowledges discussing surrogacy around his congressional office. He just recently learned that these discussions made two female staff members “uncomfortable.”

Of course, even if some might frown on discussions of surrogacy around the water cooler, this is not exactly what reasonable people consider to be actionable sexual harassment, nor is it grounds for ending a decent man’s political career.

But Franks doesn’t want to fight. In the midst “of this current cultural and media climate, I am deeply convinced I would be unable to complete a fair House Ethics investigation before distorted and sensationalized versions of this story would put me, my family, my staff, and my noble colleagues in the House of Representatives through hyperbolized public excoriation,” he said.

House Speaker Paul Ryan’s (R-Wisc.) office said the complaints against Franks were “credible” and that the speaker pressed Franks to resign. Apparently, again assuming the reasons reported for Franks’ resignation are true, Ryan has embraced an expansive definition of sexual harassment.

Very broadly speaking, Republican office-holders tend to be ashamed when sexual improprieties are made public. Without much ado they resign. Democrat politicians accused of the same tend to fight to the bitter end.

So end the political careers of Al Franken and Trent Franks.