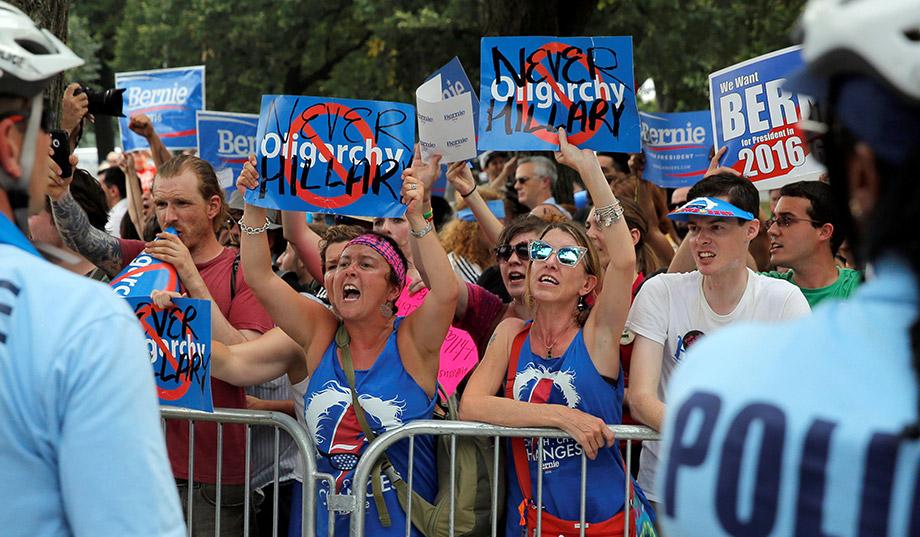 About a dozen protesters, several wearing festive Christmas hats, toted signs that read “YOU are What Happened” and attempted to sing in unison as they stood along the sidewalk in t-shirt weather and waived at passing motorists.

“There was a girl named Donna (Brazile), she wrote a juicy book. She spilled the beans on Clinton, who really was a crook,” the group sang to the Jewish classic “Dreidel, Dreidel, Dreidel.” “The money for state parties, went to the victory fund. She ran the DNC, even before the primaries were won.

The song references former Democratic National Committee Chairwoman Donna Brazile’s new book “Hacks: The Inside Story of the Break-ins and Breakdowns that Put Donald Trump in the White House.”

In an excerpt published by Politico last month, Brazile outlined how the Clinton campaign loaned the Democratic Party millions of dollars as part of a legal agreement that gave Clinton control over the party’s finances.

“The agreement—signed by Amy Dacey, the former CEO of the DNC, and Robby Mook with a copy to Marc Elias—specified that in exchange for raising money and investing in the DNC, Hillary would control the party’s finances, strategy, and all the money raised,” wrote Brazile, who assumed control of the party after hackers stole and published DNC emails in 2016.

“Her campaign had the right of refusal of who would be the party communications director, and it would make final decisions on all the other staff. The DNC also was required to consult with the campaign about all other staffing, budgeting, data, analytics, and mailings.”

Since the election, Clinton has spent much of her time promoting “What Happened,” a tome dedicated to explaining all the reasons why she lost last year’s election to President Trump. The book tour has served as Clinton’s opportunity to air her grievances against Sanders, the DNC, her supporters, women voters, the media, sexism, “deplorables,” Trump, the Russians, former FBI Director James Comey and the countless others who cost her the presidency.

She hasn’t spent a lot of time discussing her own failures, such as ignoring important battleground states, self-centered ‘I’m With Her!’ campaign messages, and alienating millennials and the white middle class.

Ironically, Clinton recently told radio host Hugh Hewitt that “nobody’s actually been to see” her for advice on running for the nation’s top post in 2020.