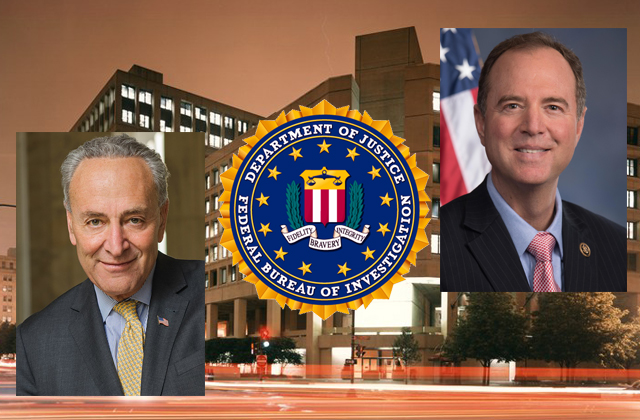 Hours after President Donald J. Trump told congressmen, as he exited the House chamber after his State of the Union address, he will “100 percent” release the memorandum written by the House Permanent Select Committee on Intelligence detailing abuses by the FBI during the 2016 political cycle, the FBI and Capitol Hill Democrats are mounting a last-ditch effort to keep the memo from the American people.

“I have served on the committee for 10 years,” said Rep. Adam B. Schiff (R.-Calif.), the ranking Democrat on the House intel committee, Monday just before the committee voted to make the memo public. “This is the first time we have sought to declassify highly sensitive information from a political reason–It is, I think, a terrible line to cross.”

It is widely reported that the memo documents how the FBI used an opposition research file on candidate Trump, the so-called “Steele Dossier, paid for by Hillary R. Clinton’s presidential campaign to secure a FISA court warrant for surveillance of the Trump campaign.

The dossier was completed by Christopher Steele, a veteran of British Intelligence service.

Schiff lost Monday’s vote, but Wednesday night he launched his next potential roadblock, the fact that the memo that was made available to all House members was not presented to the White House for review.

At 10 p.m. Wednesday, the California Democrat Tweeted out a letter that spelled out that he and his fellow Democrats were misled by Rep. Devin G. Nunes (R.-Calif.), the committee chairman, when Monday Schiff took the chairman as saying that the memo would be released without any changes or redactions.

“It is imperative that the committee majority immediately withdraw the document that it sent to the White House,” Schiff wrote.