The New York City Police Department is asking for the public’s help in identifying the man who attacked an elderly woman on a subway car in the Bronx in the early hours of March 10. Video of the attack surfaced on Thursday that not only showed the woman being repeatedly kicked in the head and body but also showed that no one came to her aid, instead other riders pulled out their smartphones and filmed the attack. 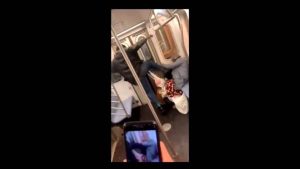 The perp acknowledged the smartphones recording him by saying, “WorldStar that, my nigger!” as he got off the train.

🚨WANTED for ASSAULT: help us bring justice to a 78-year-old woman who was brutally kicked in the face on 3/10 at 3:10 am inside the 238th St/Nereid Ave subway station in the Bronx. If you have any info, call @NYPDTips at 800-577-TIPS. Your calls are anonymous! pic.twitter.com/IhQwgtq2NO

NYPD posted an appeal for help on Twitter, “WANTED for ASSAULT: help us bring justice to a 78-year-old woman who was brutally kicked in the face on 3/10 at 3:10 am ….