This happens to be the same belief Trotsky had on his political opponents!
— Russian Bolshevik Leon Trotsky referring to the Mensheviks: “Go where you belong from now on – into the dustbin of history!”

This was quite a statement from the Obama operative who left behind a trail of genocide and lies when she retired from office in 2017.

This ad appeared in The New York Times in February 2015 pointing our her role in the Rwandan genocide.
“Susan Rice has a blind spot: Genocide,” 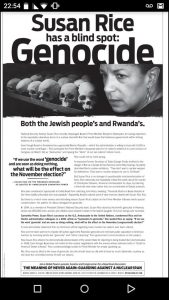