It was an odd spectacle in Minneapolis, Minnesota Sunday morning when Sen. Amy Klobuchar (D-Minn.) dragged her staff and supporters out into the middle of a snowstorm to announce her candidacy for the 2020 presidential race.

“I don’t have a lot of money,” she said during her speech. “I have grit. I have family. I have friends, and I have you.”

She certainly has enough grit to withstand the grueling conditions. The speech was a bizarre spectacle: 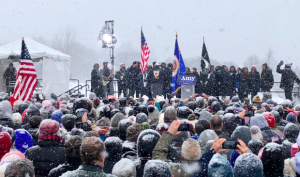 The backdrop for the speech, according to Fox News, was the I-35 bridge across the Mississippi River, which collapsed in 2007 just after Klobuchar took office, killing 13. She bragged about working “across the isle” to get the bridge rebuilt in “just over a year.”

“We worked across the aisle to get the federal funding and we rebuilt that I-35W bridge — in just over a year,” she said. “That’s community. That’s a shared story. That’s ordinary people doing extraordinary things.”