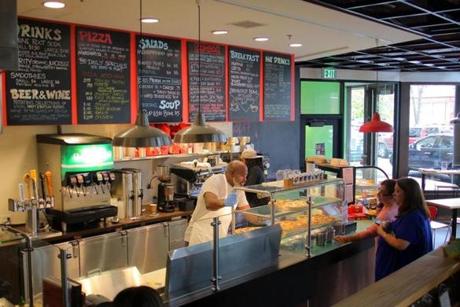 I don’t at all hate to say “I told ya so,” especially in this case.

The “fair wage” pizza shop that focused on “economic justice,” known lovingly by the students that frequented it as Dudley Dough, will be shutting down in a few months to the disappointment of many, and the surprise of none.

According to the Boston Globe, despite a $100,000 donation from New England Patriots owner Robert Kraft, the shop’s inability to turn a profit due to its overpaid workers and undercharged services is forcing it to close its doors after two years of operating.

Despite the business being a total failure, Luther Pinckney, a Dudley Dough team leader, believes that that the shop was a success because the store was there at a time when the dastardly middle class was moving in on the area.

“I don’t think anyone is looking at it as a failure,” said Pinckney. “It’s an experiment, and some very good things came out of that, such as skill-building for staff and being in this building at this time of gentrification and change in this community.”

While I can appreciate the sentiment of life experiences gained, a place that employes workers who rely on their pay to get them through life suddenly being unable to employ those people is, by definition, a failure.

Take Dudley Dough employee Royce Terrell for instance, who was — for some reason — completely blindsided by the fact that failure to turn a profit will cause a business to shut down.

“I didn’t see it coming. I have to keep working. I’ve got my youngest son in private school,“ said Terrell. “I like coming to work. It was kind of a shock.”

But Terrell and his fellow employees probably should have seen this coming from miles away. This is the same pizza joint that hosted a “Social Justice Monday” program which hosted fun discussions about all things SJW, as well as how bad corporations are.

I can’t be 100 percent sure, but I’m willing to bet that the Dudley Dough team didn’t think too highly of capitalism. It should be noted that according to the Boston Globe, three other restaurants opened up in the area around the same time as the pizza shop did. They seem to embrace the capitalist model as their shops are still open, and their employees still have their jobs.

Socialism. Does. Not. Work.