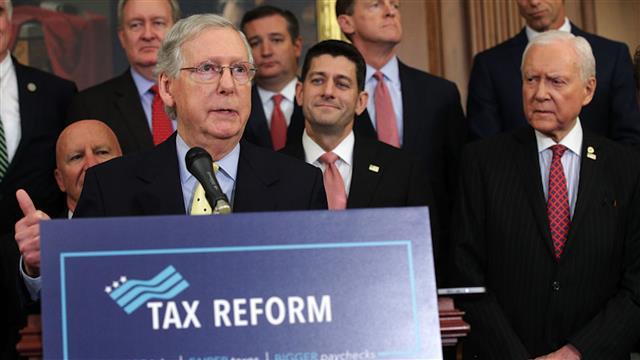 Since the release of the GOP’s long-awaited tax reform plan, a flurry of commentators have criticized it, saying it is a regressive plan that will raise taxes on a sizable portion of Americans.

What they often fail to mention is that their estimates depend on details of the plan that have yet to be released. As it turns out, different assumptions about those details can dramatically alter the projections of who gets a tax cut under the GOP plan.

For a vast majority of Americans, the main changes they would experience from the plan would be to their income tax rate, the standard deduction, the personal and dependent exemption, and the Child Tax Credit.

So what do we know about how the GOP plan will affect these variables?

1. It would lower individual tax rates.

The GOP’s framework would lower rates and consolidate tax brackets for individuals. The three new income tax brackets (down from seven) are 12, 25, and 35 percent, but the framework does not specify what the income thresholds will be.

The plan also mentions that an additional fourth top rate may be added.

2. It would double the standard deduction.

For married joint filers the deduction would be $24,000, and for single filers it would be $12,000. This means taxes would become much easier for many people because they won’t need to itemize or check frivolous boxes.

3. It would expand the Child Tax Credit.

The framework would repeal the personal exemption for dependents, “significantly increase” the Child Tax Credit, and increase the income limits at which the credit currently begins to phase out.

The framework gives no further details on these items.

Taken together, it is still uncertain how these changes will ultimately alter any individual or family’s tax liability. There are other proposed reforms that could also interact with these changes, but that hasn’t stopped commentators from projecting winners and losers.

These assumptions are often biased. They keep many Americans paying the same tax rate and actually project an increase in some people’s rate. It’s very unlikely that these conservative lawmakers intend to do that.

If we assume different income thresholds that are entirely reasonable, we find very different results.

One could, for instance, raise the new income thresholds by 15 percent so that more people would pay a lower tax rate. Lower taxes are, after all, a key stated goal of the plan.

Using The Heritage Foundation Individual Income Tax Model, we estimated what these changes—along with the other details released thus far—would mean for taxpayers. In particular, we modeled:

Doubling of the standard deduction.

Elimination of all personal exemptions.

With these three changes, some of our modeled income groups would end up paying slightly more in taxes because the lower rates and higher standard deductions don’t fully compensate for getting rid of the dependent exemption.

Pairing this with the new larger standard deduction and lower tax rates, most families would end up paying less in taxes than they currently do. In fact, every income group would pay a lower tax bill.

Those households with adjusted gross income between $100,000 and $125,000, for example, would see a significant drop in their tax bill of about 6 percent.

Those with adjusted gross income below $50,000 would receive the smallest tax savings because they already pay very little in taxes. However, the Child Tax Credit would likely increase by $500 or more, which would largely benefit this group.

Moreover, other changes to state and local tax deductions and other provisions would likely shift some of the gains for upper-income earners toward middle- and lower-income earners.

(Of course, it is near impossible to enact pro-growth tax reform without some positive benefits for the individuals and small business that pay the majority of taxes, and the top 5 percent of taxpayers pay 60 percent of all federal income taxes.)

These are perfectly reasonable assumptions to make about the details of the GOP plan, given the political promises that have been made. Tax cuts for middle-class Americans are going to be real.

There are also several other possible changes that would alter our analysis, such as eliminating the state and local tax and municipal bond interest deductions (along with some other itemized deductions), creating the newly proposed nonrefundable credit of $500 for non-child dependent care, and nixing the alternative minimum tax.

Regardless of whether these changes occur, the GOP plan makes a huge stride in expanding the standard deduction. Given that 70 percent of Americans already take this deduction, our results show that the GOP plan may very likely result in a tax cut for Americans across the board.