*Please see important note at the bottom of this article.

Turning Point USA (TPUSA), Prager University and private citizen Amy Mek have two things in common: They are rising stars in the conservative movement and within the past couple of weeks, they were victims of smear pieces from the highly-discredited and extremely partisan Southern Poverty Law Center.

There is a clear pattern with the Southern Poverty Law Center (SPLC). Once a conservative group/individual appears to be on the rise, the SPLC declares them to be a hate group or otherwise smears them. Any group or individual that takes a stand and is clearly resonating with Americans must be stopped by using over-the-top hyperbole and vitriol.

The very title of the piece against PragerU is revealing. Written by Brendan Joel Kelley, the article is titled “PragerU’s Influence.” The article opens with citing Princeton history professor Kevin M. Kruse, who refuted one of PragerU’s videos on Twitter, which was all the SPLC needed to justify going on the attack.

Kevin M. Kruse is not exactly a non-partisan figure, but the Southern Propaganda Law Center is not worried about objectivity. In fact, if one could conjure a prototype of condescending leftist elitist, Kruse would fit the bill quite nicely. Kruse’s book “One Nation Under God: How Corporate America Invented Christian America” won rave reviews from the usual suspects.

SPLC refers to PragerU’s “5 Minute Ideas” videos as being “an indispensable propaganda device for the right.” Kelley  proclaims that some of the videos, which use subject matter experts to address certain issues, feature individuals representing “[an] extreme and combative internet incarnation of conservatism” such as Ben Shapiro, Candace Owens, Charlie Kirk, Jordan Peterson, James Damore “and others of their ilk.”

Kelly cites sociologist Francesca Tripodi, who is quite concerned about “…the connections some PragerU presenters have with white nationalist thinkers.” She cites Dave Rubin of the Rubin Report who hosts guests such as “Milo Yiannopoulos, conspiracy theorist Paul Joseph Watson of Infowars, and [Stefan] Molyneux.”

As if that is not ridiculous enough, the biggest stretch, which actually made this author laugh into an empty room, was the SPLC’s concern- not with the PragerU videos, but what comes up as “related videos” on “YouTube,” where one “can find the channel of Stefan Molyneux, an extremist who espouses pseudo-scientific ‘race realism’ propaganda.”

The author finishes grimly by stating that PragerU “seems to be yet another node on the internet connecting conservative media consumers to the dark corners of the extreme right.”

The Southern Poverty Law Center published a full-length feature article about a Twitter user who has been the victim of vicious doxxing and a smear campaign that started with the Council on American Islamic Relations (CAIR) and Luke O’Brien of the Huffington Post.

The SPLC wanted a piece of the action, referring to Amy Mek as an “anti-Muslim troll.”

For an example of the ridiculous partisan nature of the “article,” O’Brien “reports” in part:

Her [Amy’s] Twitter timeline was one long screed that reflected the collective id of the Make America Great Again movement. Tea party rage, evangelical hokum and white supremacy ― it was all there. In sufficient volume, this kind of hate can now turn any no-account right-winger into a star on social media. And it worked for @AmyMek.

The article was shared all over social media, despite the fact that it clearly went against Twitter rules for “targeted harassment,” which define “Abuse:”

Abuse: You may not engage in the targeted harassment of someone, or incite other people to do so. We consider abusive behavior an attempt to harass, intimidate, or silence someone else’s voice.

“Hatewatch Staff” at the SPLC doubled down on Amy and used the occasion to smear anti-Jihadist Chris Gaubatz, who successfully infiltrated the Council of American-Islamic Relations (CAIR) and wrote about his experience.

Instead of offering a critique of his book “Muslim Mafia: Inside the Secret Underworld That’s Conspiring to Islamize America,” the SPLC doubled down on the vitriol, bragging that they “and other civil rights groups” have sought to shut down Gaubatz’s business with partner John Guandolo which trains law enforcement on the nature of Islam. The SPLC’s “Hate Watch” staff declared that Gaubatz and Guandolo “have no business training law enforcement.”

Luke O’Brien’s article incited a ton of abuse in Amy’s direction, including tweets like this: 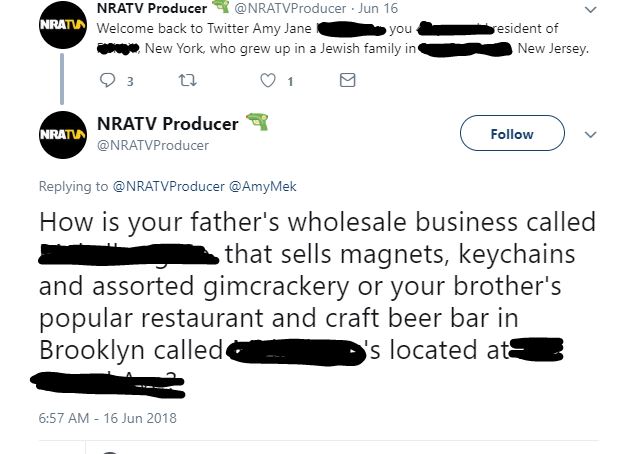