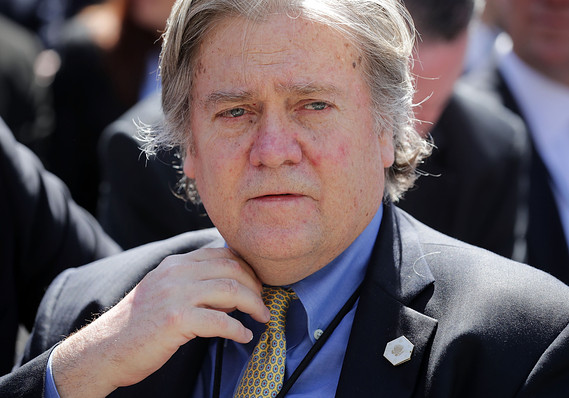 Former White House strategist Stephen K. Bannon challenged his former colleagues in the White House for signaling opposition to President Donald Trump’s response to the protests in Charlottesville, saying that they should have resigned if they didn’t agree with the president.

“If you’re going to break with him resign. The stuff that was leaked out that week by certain members of the White House, I thought that was unacceptable,” Bannon told CBS anchor Charlie Rose in an interview.

BANNON to Gary Cohn et al: "If you're going to break with him, resign" pic.twitter.com/yd35O3WOvn

Gary Cohn complained about Trump’s response on-the-record and associates revealed to the New York Times that he had even drafted a resignation letter. His son-in-law Jared Kushner and his daughter Ivanka Trump urged him to “take a more moderate stance” according to the New York Times.

Bannon called out Cohn by name.

“I’m obviously talking about Gary Cohn and some other people,” he said. “If you don’t like what he’s doing and you don’t agree with it, you have an obligation to resign.”

When Rose asked Bannon if Cohn should have resigned, Bannon replied, “Absolutely.”

He described himself as a “street fighter” for Trump who would continue to support the president outside the White House.

“By the way, I think that’s why President Trump and I get along. Donald Trump’s a fighter, great counterpuncher. He’s a fighter. I’m going to be his wingman outside for the entire time,” Bannon said.

He added that Trump’s enemies needed to know that there would never be “a free shot on goal.”

The full interview with Bannon will be aired this Sunday on the CBS program 60 Minutes.