The iconic image is known the world over; brilliant white stone buildings atop a cliffside village on the volcanic Greek Isle of Santorini, the bright blue domes of an orthodox church contrasting with the dark volcanic rock of this ‘’honeymoon’’ island in the Aegean Sea. 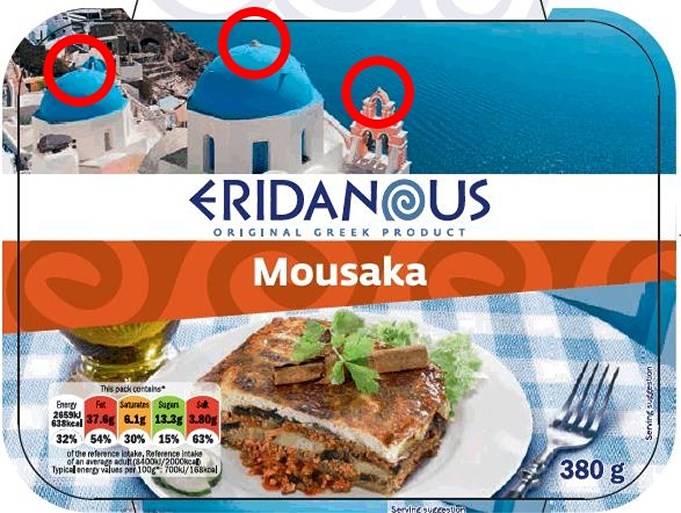 One such enterprise using the famed Santorini landscape to market its products is European supermarket giant, Lidl. The German discount chain uses the image on packaging for a range of Greek products, with one difference from reality – the crosses have been deliberately removed from the blue-domed church in Lidl’s version of the iconic image.

Known for its competitor-beating prices, the no-frills brand is a hit with bargain hunters, having become a staple of the retail landscape in recent years.

Operating 10,000 stores in Europe, Lidl has recently expanded to the United States, with supermarkets opening at multiple East Coast locations this summer. An initial 100 US stores are in the pipeline.

The controversy arose yesterday when Belgian media outlet, RTL, was contacted by a Lidl customer annoyed that the brand would choose to erase, on its packaging, such an important part of the Greek landscape and culture.

Promptly responding to the negative publicity, Lidl’s explanation of the controversy Thursday could best be summarized as…’‘because diversity’’.

“We are a company that respects diversity and this explains the concept behind the packaging’’, a spokesperson for Lidl explained to RTL, adding that the company avoids the use of religious symbols on its packaging to remain neutral. The chain sells halal products, however, some of which bear explicitly Islamic symbols as part of their packaging.

If the image of a tiny cross atop a church is so offensive that it would need to be erased by a marketing department, perhaps those who respect the cross – and its centuries old presence on the historical landscape – should start voting with their pocketbooks?

Contacted by The Gateway Pundit this afternoon, Lidl UK’s Press Office expressed regret for the controversy and stated that all feedback received on the matter would be taken into consideration ahead of future redesigns.