Trump antagonist Rep. Ted Lieu (D-CA) deleted a tweet posted Friday morning attacking President Donald Trump for taking a trip to Alabama. Lieu went off on Trump with Lieu acting completely unaware that parts of Alabama had been recently devastated by deadly tornadoes. Lieu later explained the tweet, saying he assumed Trump was going to Alabama for a rally.

Trump tweeted Friday before he departed, “Heading now to the Great State of Alabama!”, prompting Lieu to vomit on Twitter:

“WE ARE IN THE THIRD WEEK OF A NATIONAL EMERGENCY! Can you feel the emergency? Is this why @RealDonaldTrump is going to Alabama, because we need to build a Wall along Alabama’s southern border? Oh wait, I just looked at the map….#FridayMorning Thoughts” 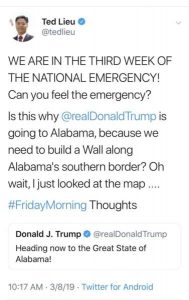