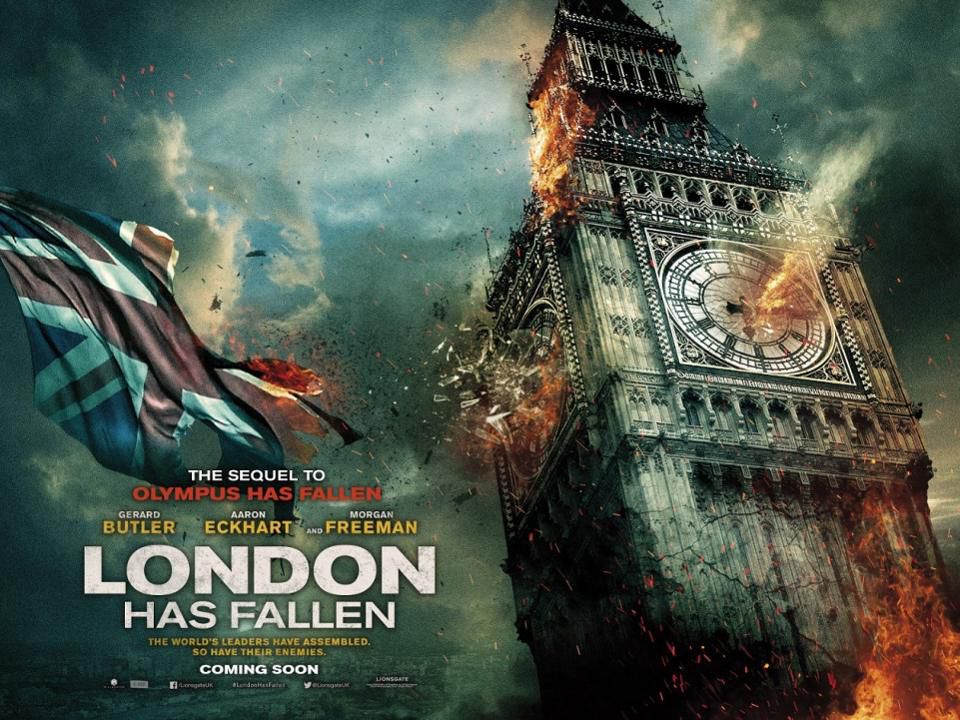 How leftist critics consistently slam the films that portray our enemies truthfully.

Scrolling the other day through Netflix’s mostly unimpressive offerings, I noticed something entitled London Has Fallen, a thriller about a terrorist attack on the British capital. I hadn’t heard of it before. I looked it up on Wikipedia. Released in early March 2016, it’s a sequel to Olympus Has Fallen (2013), which is about an assault on the White House.

The A.V. Club, according to Wikipedia, picked London Has Fallen as its “worst movie of the year.” Variety called it “terrorsploitation” and “reactionary fear-mongering.” I had the sneaking feeling that it would be just my cup of tea.

I was right. It proved to be a rousing specimen of the genre, complete with terrorists armed to the teeth (machine guns, flamethrowers, hand grenades); shootouts and car chases; helicopters dodging missiles in the sky over London; and much else. Most important, the bad guys were the people who should be the bad guys, and the good guys were the people who should be the good guys. The picture even ended with Morgan Freeman, as the vice president, saying “God bless the United States of America.”

Hokey? Okay, if you say so. But also exciting and inspiring – precisely the kind of movie it takes to focus alpha males on the threat that jihadist Islam represents to all that they hold dear. Seen through a cynical postmodern lens, Mrs. Miniver was hokey, too. But it also, as Churchill noted, turned millions of Americans into fervent supporters of the British war effort.

After watching London Has Fallen, I went back online and read some of the reviews. First I looked at the Variety notice that Wikipedia had quoted. It was withering, accusing the film not only of “terrorsploitation” and “fear-mongering” but also of “American jingoism” and “flag-waving.” Its global box office, warned Variety, might suffer because of its focus on “American leaders and freedoms, at any cost to those of other nations.” What? The movie’s whole point was that the thugs who threaten American freedoms also threaten the leaders and freedoms of other democracies. (Minor spoiler: among those wiped out near the start of the picture were the heads of Germany, France, Italy, and Japan.)

Variety‘s chief criticism was that London Has Fallen was “effortlessly racist” and exhibited “familiar Islamophobia.” The flick’s bigotry, apparently, consisted in the fact that the terrorist mastermind was a Pakistani and not, say, a Hoosier. Variety was especially disgusted when the hero, Secret Service guy Mike Banning (Gerald Butler), told a terrorist: “Get back to F***headistan or wherever it is you’re from.” Mustn’t offend the sensitivities of mass murderers!

Virtually all of the other reviews agreed. The Charlotte Observer chastized the director, Iranian-Swedish Babak Najafi, for “stereotyping people of his religion as murderers and criminals.” (Maybe Najafi, who fled Iran for Sweden, knows a bit more about “his religion” than some hack in North Carolina?) Calling the movie “paranoid,” the San Francisco Chronicle charged that it “feeds on…fears about Middle East folks.” The Los Angeles Times said that this “extra Trump-y” offering was targeted at audiences of “angry conspiracy theorists” and that its “good guys and bad guys” were “color-coded.” And the New York Times laughed at the “preposterous number of terrorists with an equally preposterous supply of guns and explosives.”

Preposterous? As noted, London Has Fallen came out in early March 2016. In a poll taken the next month, two-thirds of British Muslims said they wouldn’t tattle to the authorities about fellow believers who were involved in terrorism. One-third of British Muslims refused to condemn violence against critics of their faith, and almost one-fourth admitted that they wanted the U.K. to be governed by sharia law. In 2017, moreover, it was reported that intelligence officers had identified no fewer than 23,000 “jihadist extremists living in Britain.” In short: if some well-organized British Muslim wanted to carry out a terrorist strike on the scale shown in London Is Falling, he wouldn’t have much trouble finding recruits.

Just as the Times found the number of terrorists in the film “preposterous,” several critics sneered at the depiction of rogue cops by the dozen fighting for the enemy. But is this so farfetched, given the eagerness of British police departments to ignore Muslim grooming gangs and arrest critics of Islam?

No, it’s not. But mainstream film critics don’t want to face such disconcerting facts. When it comes to Islam and jihadist terror, they can’t handle the truth. Audiences flocked to London Is Falling: it grossed $250 million worldwide. But the critics, with few exceptions, prefer politically correct flops that insist on the “moral ambiguity” of the struggle between the free West and jihadist Islam – or that explicitly paint America as evil and terrorists as victims.

Oh, and speaking of facts: just in case you forgot, on March 22, 2017, a little more than a year after the “paranoid” London Has Fallen came out, a British Muslim drove a car into pedestrians on Westminster Bridge, killing four and injuring 49, then murdered a cop outside the Houses of Parliament. On May 22, a Muslim suicide bomber took 22 lives and harmed 250 people at an Ariana Grande concert in Manchester. On June 3, eight people were killed and 48 injured by three Muslim terrorists in a van on London Bridge.

Yes, the real-life death tolls were far lower than in London Has Fallen. So far, thankfully, London has been spared jihadist terror on the scale shown in the film. Key words: “so far.” With 23,000 potential terrorists running around, it’s impossible to say that Britain won’t soon experience anything like London Is Falling (the devastation in which, despite its daunting dimensions, still falls short of the reality of 9/11). And if London is spared such a fate, it’ll likely be because the city is already so heavily Islamized that the would-be aggressors will decide that any attack would be redundant.

All of which is by way of saying that when the critics call a picture like this paranoid or preposterous, it may be because there’s more truth in it than they care to deal with. Compared to the actual brutality of jihadist Islam, their leftist conceit that the real villains are American spies, soldiers, mercenaries, or oil barons is sheer comfort food. Hey, Variety, New York Times, L.A. Times, and all the rest of you: wake up! London is falling.