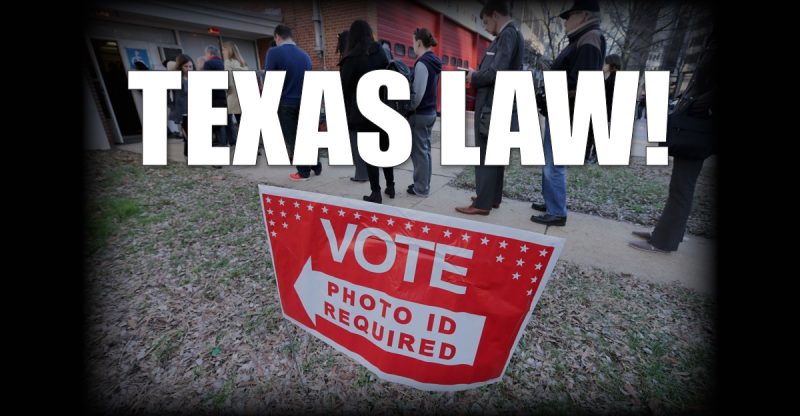 Texas immediately appealed to the 5th Circuit Court of Appeals and requested a stay of Ramos’ decision. On Tuesday in a 2-1 vote, a three-judge panel of the 5th Circuit granted the state’s request. That means the Texas voter ID is back in effect and will remain in effect until the appeals court makes its final decision on the appeal.

This also means the voter ID law will be in effect for state elections in November.

When deciding whether to grant a stay of a lower court order, appeals courts consider a number of factors. One of those is whether the party appealing “is likely to succeed on the merits.”

The 5th Circuit obviously found it significant that every single one of the 27 voters “whose testimony the plaintiffs used to support their discriminatory-effect claim … can vote without impediment” under the amended law.

The court said that a stay was appropriate “while the court can consider arguments on the merits, [because it] will minimize confusion among both voters and trained election officials.”

The court was also obviously annoyed about a point we raised in our prior article: that Ramos had gone beyond what she was supposed to do when the 5th Circuit remanded this case to her in 2016.

The Fifth Circuit had found that since the vast majority of Texas voters could meet the ID requirement, Texas simply had to amend the law to come up with a way for the small number of individuals who couldn’t meet the photo ID requirement to vote.

Instead of just reviewing the “reasonable impediment” remedy for this small universe of voters that Texas came up with, Ramos enjoined the entire law once again so that it couldn’t be applied to any voters in Texas.

In an extensive footnote in the Sept. 5 stay order, the 5th Circuit criticized Ramos’ actions for going beyond the “scope of the mandate” she had been given in the remand by the appeals court. The court found her behavior “puzzling.”

While this was not a decision on the merits, it is still a significant win for the state and an ominous sign for Ramos’ ill-considered opinion. Given the 5th Circuit’s criticism of Ramos and other problems with her opinion, it seems likely that Texas has a good chance of winning this case and getting Ramos reversed.

That’s good news for Texas voters who deserve integrity in their election process.