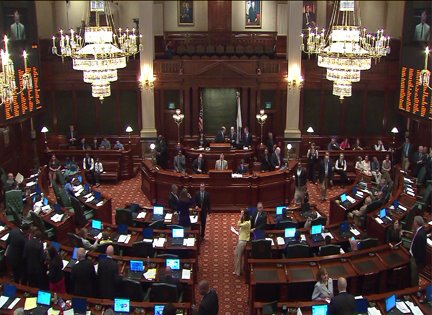 The media has hyperobsessed over the Kansas tax hike this year and sold it as a repudiation of supply-side economics. But the real story in the states has been the catastrophic effects of tax-and-spend fiscal policy in Illinois.

Last week, Illinois House Speaker Mike Madigan endorsed a $5 billion annual income tax hike. This would be the largest tax increase of any state in years. Republican Gov. Bruce Rauner has blocked new taxes for three years but is now under intense pressure from the Springfield political machine to agree to the revenue heist.

Anyone who thinks this soak-the-rich scheme will solve Illinois’ long-term budget crisis should have their head examined. Illinois already ranks in the top three among the 50 states in state-local tax burden, so if raising taxes were any kind of solution here, the Land of Lincoln would be a Garden of Eden.

Instead, the state has been a financial basket case for years.
This is a state that is now $14.5 billion in arrears whose bonds have been downgraded to near-junk bond status, and that is losing its most valuable resource: its businesses and citizens. Small business contractors have to wait six months or more to get paid.

Back in 2013, then-Gov. Pat Quinn, a Democrat, followed the advice of economists like Paul Krugman of The New York Times and raised taxes on the very wealthiest residents of the state. He argued that the superrich in Illinois could easily afford to pay a bigger share of the tax load and no one would leave.

The more Quinn raised taxes, the deeper the budget hole got. Whole resort towns in Florida and Arizona have become high-income refugee camps of former affluent residents of Chicagoland.

In 2014 the voters dumped Quinn and his tax-and-spend economics and opted for businessman Bruce Rauner, a Republican. Rauner tried to fight the empire in Springfield but was stymied every step of the way. Democrats laughed away his call for a constitutional spending cap, reforms to a pension system that is $200 billion in the red, a property tax cap and so on. Their mantra sounded a lot like the giant plant in the film “Little Shop of Horrors” — “feed me.”

If there is any state that desperately needs term limits, it is this one.

The tax increase is a punt in dealing with the massive unfunded liabilities in its government pension system. According to the Commission on Government Forecasting and Accountability, Illinois’ pension payments are the major contributor to spending growth. Following the recent credit downgrade, Moody’s Investors Service cited the state’s overwhelming pension debt level as a contributor to the poor credit rating and negative outlook. In November, the state reported having $130 billion in unfunded pension liabilities, but Moody’s calculates that level of pension debt as twice as high, or $251 billion. A recent Hoover Institution analysis estimates Illinois’ pension funding ratio to be 29 percent, the lowest level in the United States.