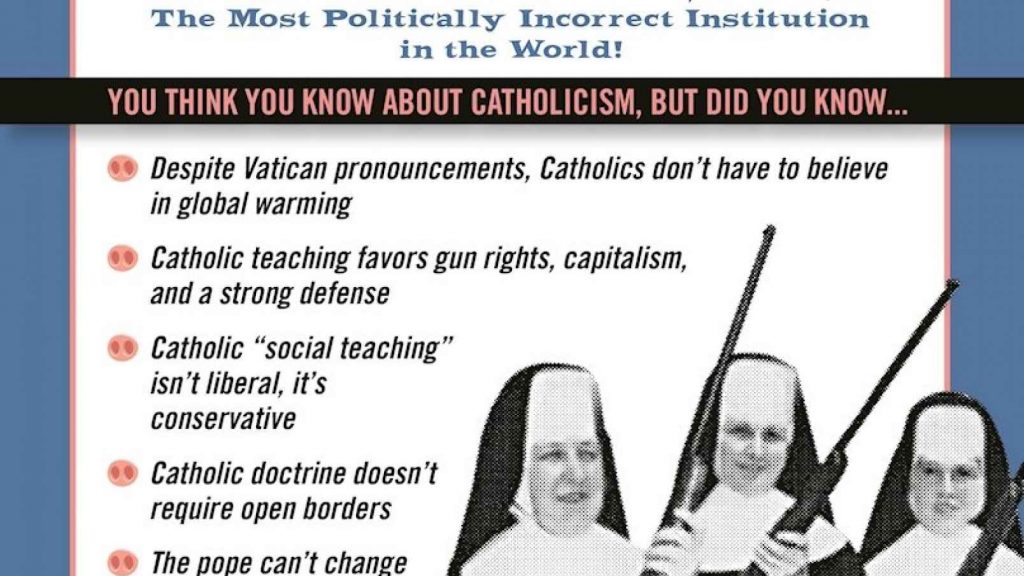 A 2015 Pew survey reported that the total number of Catholics in the United States dropped by 3 million since 2007, now comprising about 20 percent – or one-fifth – of the total population. Catholicism is losing more members than it gains at a higher rate than any other denomination – a recent development which the radical progressives at Salon celebrate. Why is this an issue that should worry Americans and the Western world at large?

One key reason is that the fastest-growing religion in the country and around the world is Islam – something Salon radicals also no doubt celebrate. The fundamentalist brand of Islam that is once again on the rise is antithetical, indeed openly hostile, to the values of Western civilization, and for many centuries Catholicism as a central component of European identity was a bulwark against its spread. But for various reasons the West has lost confidence in its cultural identity and moral authority in recent decades, and the result has been submission to decadence, to , and to Islam. If we are to reverse a civilization in rapid decline, we must undertake a resurgence of Western exceptionalism with a militant Christian ethos at its core.

For Catholics who have backslid or grown apathetic, that means waking up to what is at stake, and then making a renewed commitment to understanding and manifesting the tenets of their own religion, a religion that has been steered toward emasculation, socialism, and interfaith suicide by the radical left. For non-Catholics as well – even atheists – it means acknowledging how crucial a revivified Christianity is to a defense of Western civilization, and educating themselves about the myths and realities of Catholicism.

Enter John Zmirak’s timely book, The Politically Incorrect Guide to Catholicism, published by Regnery. Zmirak is an editor, teacher, screenwriter, political columnist, and the author of the popular Bad Catholic’s Guides and The Race to Save Our Century: Five Core Principles to Promote Peace, Freedom, and a Culture of Life. His work has appeared in First Things, The Weekly Standard, USA Today, and FrontPage Magazine, among other venues.

The book’s cover declares Catholicism to be “the most politically incorrect institution in the world!” and features a trinity of grinning nuns with guns – itself politically incorrect enough to trigger leftists who prefer a less militant, more social justice-oriented, and submissive Christianity. The cover also features such triggering bullet points as:

and perhaps most politically incorrect and offensive:

In fact, Zmirak notes, among the good things the Church has brought to the world are the university, the hospital, the world’s greatest art, modern science, the strongest check in history on the power of the state, and overall a new and improved Western civilization in the wake of the fall of the Roman Empire. In our culture’s rush to inflate Islam’s reputation by crediting Muslims with inventing everything from algebra to the astrolabe, Catholicism’s actual achievements by comparison are world-beating.

The Guide’s dozen chapters cover such topics as where the Church stands on birth control and abortion, the limits of papal authority, the free market, immigration, amnesty, socialism, progressivism, sex, science, self-defense and capital punishment, and yes, the scandal of “priestly pederasts,” which the author does not whitewash.

Zmirak addresses the fragmentation of the Catholic Church which began with the Second Vatican Council in 1960 and remains to this day, exacerbated by the issue of birth control. He covers the impact of secular modernity on the Church, and the “explosion and radicalization of progressive dissent” which embraced a social justice agenda and which has resulted in many Catholics taking positions “on economics, welfare policy, and defense that [a]re a virtual mirror image of the Democratic Party platform.”

This explains, the author notes, how “politicians like Nancy Pelosi and Joseph Biden can support partial-birth abortion, same-sex marriage, and legal mandates that nuns such as the Little Sisters of the Poor distribute the ‘morning-after’ abortion pill – and still go to Holy Communion. They haven’t abandoned the Church. They are in fact its progressive vanguard…”

As for the Crusades and the Catholic “just war” doctrine, Zmirak points out that the Church “has never taught that pacifism is the appropriate response to conflict.” True, there are strict requirements for legitimate defense, but “Christian pacifism would leave Christian nations defenseless from conquest and persecution at the hands of aggressive non-Christians.” If non-resistance to violence were practiced consistently, he adds, “it would mean that we’d have no police either, and that parents should not defend their helpless children from murder or rape.” The Crusades, which today are condemned as evidence of “a hideous, anti-Christian endeavor for which the Church should never stop apologizing – and which Muslims are justified in resenting to this day,” were in fact, in large part, “a heroic if doomed attempt to liberate conquered nations from the yoke of intolerant Islam.”

Zmirak concludes the book with a call to arms: “There can be no truce, no respite, no surrender. As the price of calling ourselves Christians, we must make our case for natural law, religious and economic liberty, the sanctity of life, and the truth about sex year in and year out, regardless of the vagaries of particular candidates and party platforms.”

He notes that he collaborated with Whole Life program founder Jason Jones to identify the five “Ideologies of Evil” that made the twentieth century the bloodiest in human history:

In opposition to those evils, Zmirak and Jones list fundamental Catholic principles “that must animate any decent politics”:

There is so much more to The Politically Incorrect Guide to Catholicism than this brief review may suggest. The book is dense with information (including thirty pages of endnotes), but it is entertaining as well as enlightening for both believers and non-believers. It also provides a wealth of other sources for further investigation, in frequent sidebars called “Books You’re Not Supposed to Read.” In this time of rising Islamophilia and openly anti-Christian bias among our cultural elites, John Zmirak’s book itself is one you’re not supposed to read, but definitely should.