In another segment of “the left wing media hates you and wants you dead,” an editor from far-left ThinkProgress went off the rails and Tweeted about eliminating Republicans late Tuesday night.

“F*** bipartisanship,” Ian Millhiser said. “Republicans are bad. They have bad morals and bad ideas. The goal should be to eliminate them utterly as a political movement and then allow a center-right party to move into the vacuum which has basic skills like arithmetic and not being racist.” 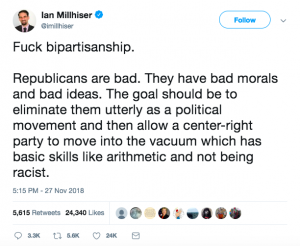 According to Millhiser and the vacuous crowd that finds his content compelling, all Republicans are racists, and he should have control over which political parties are “allowed” to exist. […]