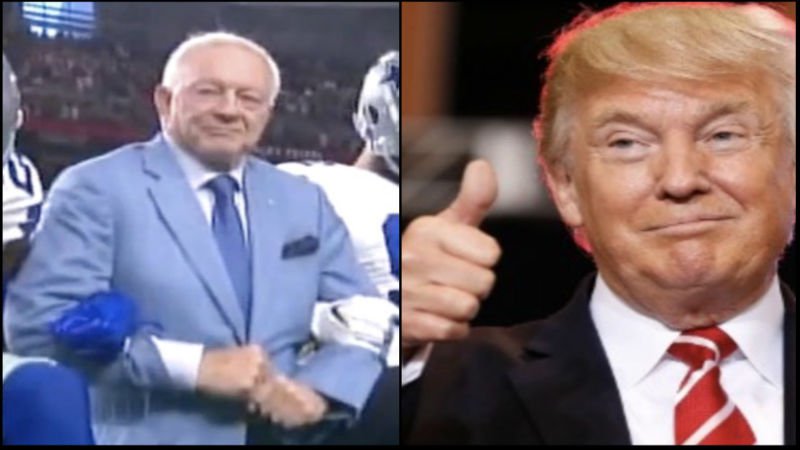 Local 100 of the United Labor Unions filed a complaint against Jones and the Cowboys with the Fort Worth, Texas, office of the National Labor Relations Board.

“The employer, evidenced by repeated public statements, is attempting to threaten, coerce, and intimidate all Dallas Cowboys players on the roster in order to prevent them from exercising concerted activity protected under the act by saying he will fire any players involved in such concerted activity.”

“Jones through his efforts to bully his playing workforce is attempting to unilaterally establish a previously nonexistent condition of work,” said Wade Rathke, chief organizer of Local 100, in a written statement announcing the charge.

In an interview with the Fort Worth Star-Telegram, Rathke said he’s trying to send a message to Jones, and took a shot at President Donald Trump as well.

“Either way it’s a threat and you can’t threaten someone’s job for concerted activity,” Rathke said. “The point is he is threatening anybody and everybody. We are trying to send Mr. Jones a message that there is a law here. The law here is that you have the ability to act with your co-worker. You can’t just roll over someone’s rights when they are a worker. You can’t bully workers on the job. President (Donald) Trump might not get that. Jones might be confused. But these are workers with rights with the National Labor Relations Board.”

A field agent will be assigned to this case, and will reach out to the Cowboys and the NFL Players Association.

The NFL game operations manual currently states that players “should” stand for the anthem, but after league commissioner Roger Goodell announced his desire for all players to stand, the team owners could reevaluate that policy in upcoming meetings.