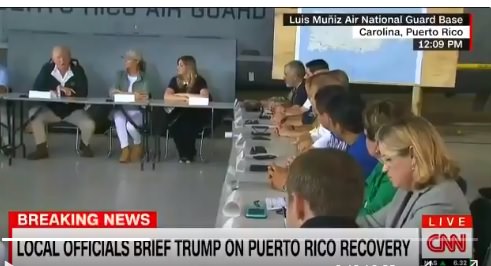 The far left San Juan Mayor was in the room scowling at the US president.

The mayor looked annoyed and did not look at him.

During the president’s meeting with top Puerto Rico officials President Trump and Governor Ricardo Rosselló discussed the hurricane deaths on the island.

The governor told President Trump that 16 people have died in the level 5 Hurricane Maria.

#Trump in #PuertoRico: "Budget a little out of whack" and "16 (dead) vs thousands, be proud" | UNBELIEVABLE! | #HurricaneMaria pic.twitter.com/LH9jU2rdnv

The dishonest mayor slammed Trump and wore a “Help Us We Are Dying” T-shirt as she made the rounds on the liberal media.

This was a lie.

Only 16 people have died from Hurricane Maria in Puerto Rico.

No wonder the liberal mayor would not look at the US president during the meeting.

And President Trump slammed the liberal mayor for politicizing the horrific disaster while she was sitting in the room.