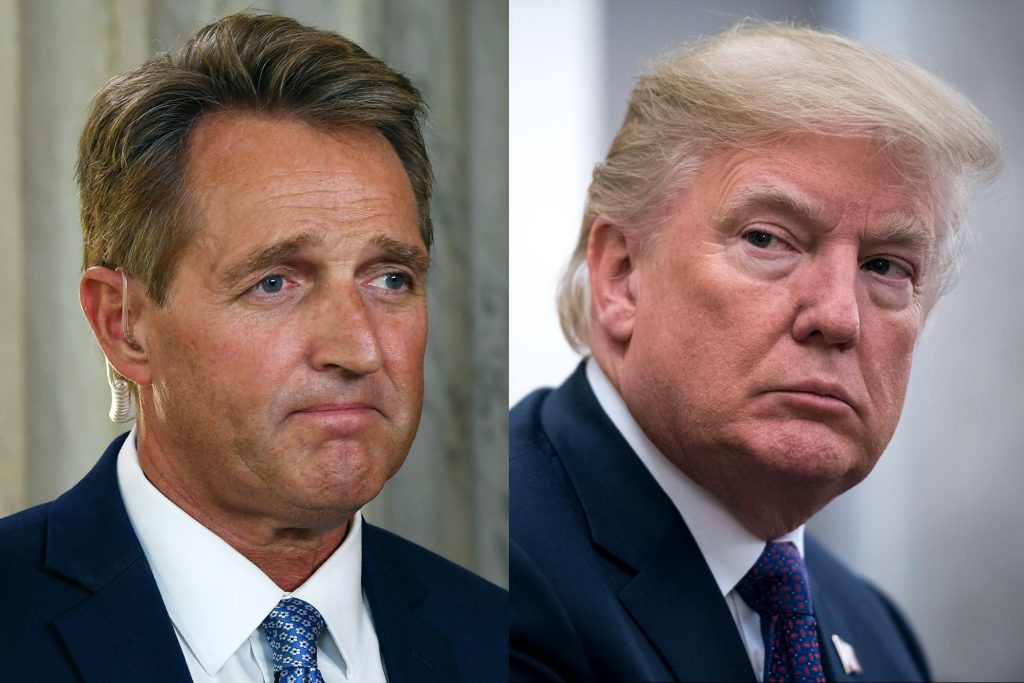 Another example of how elitist Washington looks down on the voters outside of America’s imperial city is Arizona Senator Jeff Flake, a Beltway hero for his constant bitching about President Donald Trump.

Flake has become one of the media’s most indispensable quote machines for anti-Trump stories, this despite the fact that the people in his home state think that he sucks so badly that his approval ratings are hovering somewhere between pedophilia and leprosy.

The pride of Snowflake, AZ has had to announce that he would not be seeking reelection in 2018, this is something that would normally be seen as a sign of a spectacular failure but that isn’t the way that it works with the wonk wankers, paid off presstitutes and Deep State mouthpieces on CNN, the New York Times and the Washington Post.

Flaky Flake has been opining lately on the Alabama Senate race in which local hero Roy Moore is in the fight of his life over an obviously orchestrated smear campaign sprung by allies of Senate Majority Leader Mitch McConnell.

No news here. I've been saying this to anyone who will listen https://t.co/50klmeSm5a

Flake referred to the Republican party (translation: the RINO Never Trumpers) being “toast” if the establishment is unable to stop Moore. Shouldn’t Flake worry about his own state? That is a serious question for not only him but all of the rest of the anti-Moore Republicans who believe that voters in Alabama are too dumb to be allowed to participate in the democratic process.

Sen. Jeff Flake(y), who is unelectable in the Great State of Arizona (quit race, anemic polls) was caught (purposely) on “mike” saying bad things about your favorite President. He’ll be a NO on tax cuts because his political career anyway is “toast.”

President Donald Trump slammed back at Sen. Jeff Flake in a tweet Sunday night, calling him “unelectable” and referring to his political career as “toast” days after the Republican senator was caught criticizing the president.

“Sen. Jeff Flake(y), who is unelectable in the Great State of Arizona (quit race, anemic polls) was caught (purposely) on “mike” saying bad things about your favorite President. He’ll be a NO on tax cuts because his political career anyway is “toast,” the president tweeted.

While Trump appeared to write off Flake’s vote on the Republican tax bill, the Arizona senator’s communications director tweeted that Flake “is still reviewing the #TaxReform bill on its merits. How he votes on it will have nothing to do with the president.”

Flake has been an outspoken critic of Trump’s. During a speech on the Senate floor last month in which he announced he wouldn’t seek re-election, the senator called out Trump for his behavior as president, which he called “reckless, outrageous, and undignified.”

White House press secretary Sarah Sanders said the remarks were “not befitting of the Senate floor.”

Of course, Flake will vote NO on tax cuts, just like his fellow obstructionist John McCain whose brain is slowly being devoured by incurable glioblastoma but until he drops dead on the Senate floor inveighing against Trump, McCain will be leading the obstructionists.

Arizona conservatives should consider themselves lucky that they will soon be rid of both of these phonies and can elect senators who are more in line with their own values rather than those of the swamp.