“Trump: ‘George Washington would be voted against 100 percent by Schumer and the con artists,’” he said according to AP reporter Erica Werner.

This comment prompted criticism of the first president, George Washington from a dimwitted CNN commentator who sees American history as only black vs. white. 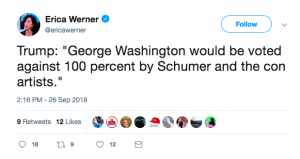 “HE WAS A SLAVE OWNER,” said Symone D. Sanders. 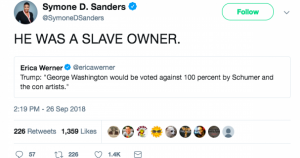 Apparently, leftists have moved away from hating only the “racist” Confederacy and towards hating every single person responsible for creating this, the finest nation ever known to man for the fact that they owned slaves. In recent history, liberals were not so insane as to criticize immensely important historical figures like Washington, but Trump has turned them into absolute lunatics.