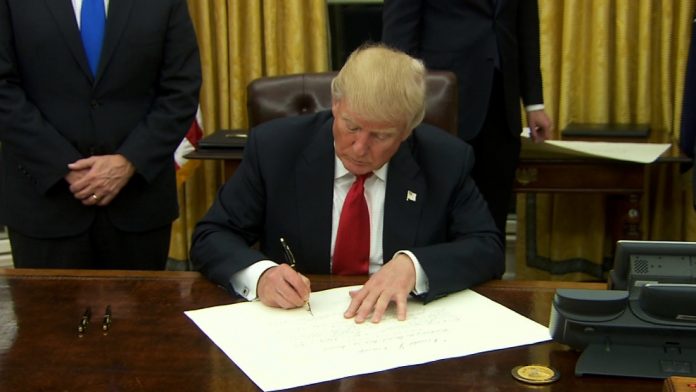 (CNSNews.com) – President Donald Trump is not giving up on health care reform. He will sign an executive order on Thursday allowing individuals to band together to buy insurance across state lines.

“People can buy — it will cost the government nothing. You’ll go out — private insurers are going to give you incredible health care. And I’ll tell you what, this will take — and I can sign it myself, I don’t need anybody,” Trump said.

“I would have done it earlier, except I was hoping that they (Republicans) were going to put this through and I’d have it in the bill.

‘But we’re signing tomorrow a health care package that will cover — I don’t know, people say 30 percent, people say 25 percent, and some people say it could be 50 percent. It’s going to cover a large percentage of the people that we’re talking about,” he said, referring to people in the individual market.

The president mentioned truckers: “Truckers are perfect for this. They unite. Truckers will benefit.”

“Well, we thought we had it,” Trump said. “The first time, we thought it was done. And we thought (Sen.) John (McCain) was with us. All of a sudden, out of nowhere, he voted against, so we end up losing by one vote.

“But here’s the thing, we’re going to get it,” he continued. “And you know, I always say never give up; never, ever quit. We don’t quit.  We are there.  We’re one vote short. We’re there — I actually think right now, we have the votes. But we have to wait. We have to wait for a little while. We’re going to do the taxes first.”

Sen. Rand Paul (R-Ky.) tweeted this week that he’s been working with Trump for months on the plan to allow insurance sales across state lines.

Trump has invited small business owners to the White House on Thursday to watch him sign the executive order.