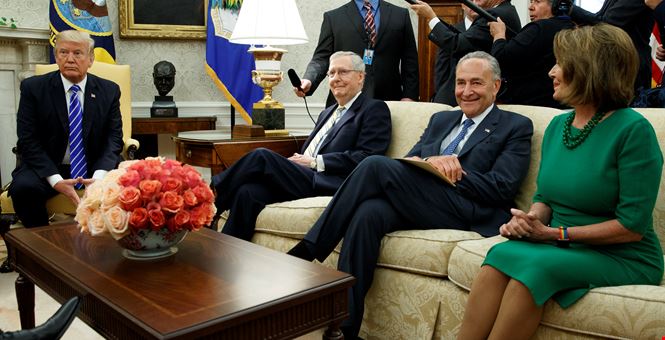 Despite promising to defund Planned Parenthood on the campaign trail, the spending deal President Trump reached with Democrats last week will continue funding the nation’s largest abortion giant through Dec. 8.

As a candidate, Trump said in a letter to pro-life leaders that he is “committed to … Defunding Planned Parenthood as long as they continue to perform abortions, and re-allocating their funding to community health centers that provide comprehensive health for women.”

But as Terence Jeffrey points out, the latest deal that funds Planned Parenthood into Fiscal Year 2018, which begins Oct. 1, is the third spending deal he’s signed as president that continues federal funding for the abortion group.

The third was the continuing resolution he signed Friday. This law will allow the federal government to keep spending money into fiscal 2018 as it has been under the Consolidated Appropriations Act, 2017—and was combined with a measure to provide $15.25 billion in recovery money for hurricane-stricken areas as well as with a measure to suspend the legal limit on the federal debt until Dec. 8. (CNS News)

President Trump did make good on his campaign promise in the budget proposal he sent Congress earlier this year, however, which stripped Planned Parenthood and any group that performs abortions from receiving Medicaid or Title X funding.

The Office of Management and Budget touted Trump’s fulfillment of his promise in a fact sheet released about the budget.

“The Budget also follows through on a campaign promise and prohibits any funding in the Labor-HHS appropriations bill for certain entities that provide abortions, including Planned Parenthood. This prohibition applies to all funds in the bill, including Medicaid,” OMB said.

According to its most recent annual report, Planned Parenthood performed 328,248 abortions in the year ending Sept. 30, 2015.