Worsham’s account was banned on Christmas Eve after she posted tweets critical of pedophiles and Twitter’s decision to allow for pro-pedophile accounts to still remain active while deeming Conservative accounts to be “violations of terms of service”. 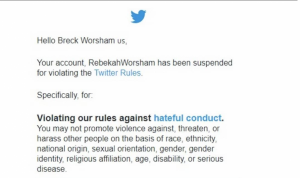 On Christmas Eve, Worsham received the following email from Twitter informing her that her anti-pedophile tweet “violates rules against hateful conduct”.

Worsham said her tweet was in direct reference to violent pedophiles.