One of the last things that David Horowitz was able to tweet before his account was locked was a link to an article, “How the Left is Outsourcing Censorship of the Internet.” The article described how the left is using tech companies to silence political dissent. Not long after, @horowitz39 was locked by Twitter. 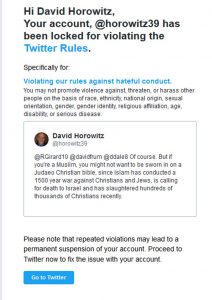 The censorship tweet wasn’t what triggered Twitter. But it does describe the great crisis we all face.

Instead, David Horowitz was censored for tweeting, “But if you’re a Muslim, you might not want to be sworn in on a Judeo-Christian bible, since Islam has conducted a 1500 year war against Christians and Jews, is calling for death to Israel and has slaughtered hundreds of thousands of Christians recently.”

That was in response to a user who had accused him of having a “Zionist agenda”. Instead of sanctioning a bigot who had engaged in shameless Jew-baiting, Twitter censored Horowitz for telling the truth.

Twitter accused David Horowitz of violating its rules against “hateful conduct”. And that’s on a site which not only allows Louis Farrakhan, the leader of the Nation of Islam, a violently racist hate group, to use its platform, but has turned a blind eye to his top tweet, “Thoroughly and completely unmasking the Satanic Jew and the Synagogue of Satan.” According to Twitter, there’s nothing hateful about that.