Despite widespread backlash from conservatives, Twitter still refuses to let up on politically-motivated censorship as the election approaches. They have suspended US Customs and Border Protection Commissioner Mark Morgan for nothing more than celebrating the effectiveness of the new border wall. 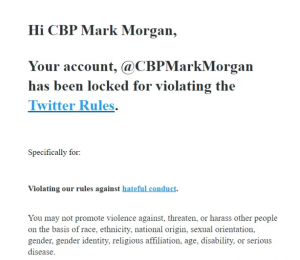 Twitter responded to the suspension by telling The Federalist: “You may not promote violence against, threaten, or harass other people on the basis of race, ethnicity, national origin, sexual orientation, gender, gender identity, religious affiliation, age, disability, or serious disease.” This, as you can tell, is simply a carbon copy of the explanation they gave to Mark Morgan and does not address exactly how the offending tweet promotes violence, threatens, or harasses.