Siobhan Prigent and a mob of violent leftists attacked an elderly pro-Trump grandfather at the protests Tuesday against President Donald Trump in London.

In the video Siobhan is seen harassing the Trump supporting grandpa, screaming “nazi scum!” over and over in his face and then LAUGH after the man was physically covered in a milkshake and kicked on the ground.

Prigent can be seen laughing and slip away after the man was knocked to the ground. 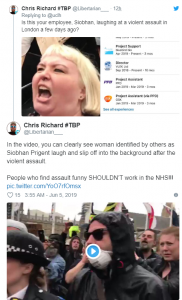 Now the abusive leftist is fighting to keep her job as a clinical trials coordinator at the University College Hospital.
She never expected to get caught for taking part in the violent leftist mob.