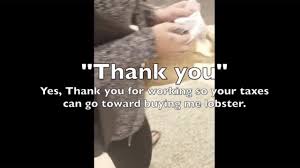 A woman receiving SSDI welfare sparked outrage this week after sharing a video featuring an animal reaping the benefits of the U.S. welfare system.

The video went viral, but the original video was later yanked from YouTube.

What was in the video?

The unnamed woman in the video can be seen visiting a grocery store, where she purchases two lobster tails with her EBT card.

Addressing minimum wage, the woman mocks how long the grocery store employee would have to work in order to pay for the $13.98 lobster tails — nearly 2 hours — and points out that the minimum wage workers then have to pay taxes, which end up going to people who receive handouts like her.

Later at home, the woman brings out her two mobile phones. One, she says, is her own phone, and the other was provided by the government. She then compares her two phones to that which the grocery store employee had — a flip phone that probably gets shut off all of the time because the employee can’t afford to pay her bills.

Toward the end of the video, the woman admits that she receives Social Security Disability Insurance for depression, and feeds her dog the lobster tails.

“This is my Coach keychains,” she says as she pulls a set of keys out of her purse. “These three keychains here, they cost more than those minimum wage people’s f***ing car payment.”

Laughing, she adds, “Well actually, most of them don’t even have f***ing cars, they’re using f***ing public transportation!”

The woman then mentions that she’s on social security for depression.

“I’m on social security for depression,” she says. “Depression is a disability. So if you’re too depressed to work full-time, apply for social security.”

Concluding the video, she says, “So, this is what the minimum wage people will pay for is for me to give lobster to my f***ing dog and make a YouTube video about it mocking them.”