The cofounder of leftwing publication Vox has stated his support of rabid mob intimidation of the political right after “protestors” trespassed on Fox News host Tucker Carlson’s property and harassed his wife and children Wednesday night.

“I honestly cannot empathize with Tucker Carlson’s wife at all — I agree that protesting at her house was tactically unwise and shouldn’t be done — but I am utterly unable to identify with her plight on any level,” said 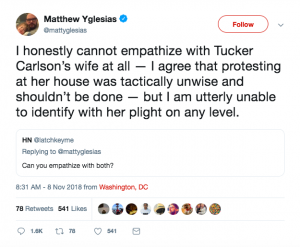 Antifa group “Smash Racism DC” appeared at Carlson’s home Wednesday night in an effort to intimidate the news host for his political beliefs.