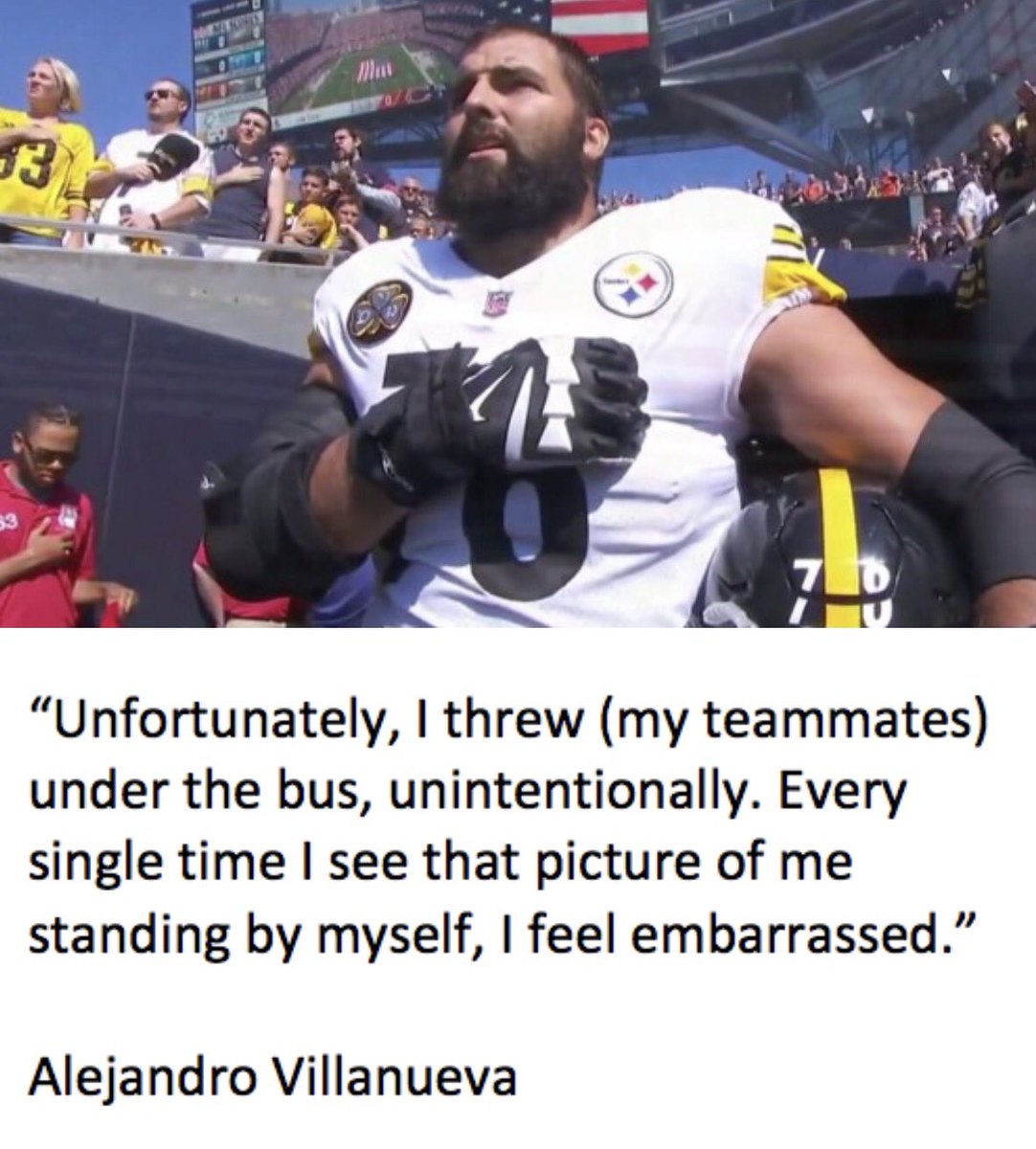 How’s this for a heart-sinking plot twist?  Offensive lineman Alejandro Villanueva – the ex-Army Ranger and Bronze Star recipient who was the only Pittsburgh Steeler to stand on the field in Chicago yesterday to honor the national anthem — is now expressing “embarrassment” over his actions.  After getting publicly rebuked by his head coach, Democratic donor Mike Tomlin, Villanueva is now explaining that he didn’t intend to defy his teammates’ plan to avoid the anthem spectacle by remaining off the field during the song.  I’ll admit, this made me feel a little bit sick at first blush, but keep reading:

Alejandro Villanueva, who stood alone during the National Anthem, now says he regrets his actions. pic.twitter.com/yXolZdp2tW

Here’s the Post-Gazette’s coverage of these latest developments:

Alejandro Villanueva said he never intended to stand alone during the national anthem on Sunday and apologized to his teammates and coach Mike Tomlin for what he called “a very embarrassing” botching of the team’s pregame plan…“We butchered our plan”…Villanueva, an Army Ranger who was deployed in Afghanistan, said he asked quarterback Ben Roethlisberger and the rest of the team’s leaders to amend their original idea, agreed upon after a Saturday night team meeting, which was to stand in the locker room during the anthem in an attempted show of unity. Part of the reason Villanueva pushed for change: he’d received texts from wounded veterans asking him to stand for the anthem. Villanueva’s suggestion, he said, was to stand with Roethlisberger and the team’s other captains at the front of the tunnel. That didn’t work out due to, as Roethlisberger said, pregame “chaos” in a small area, and Villanueva was left to stand alone with his teammates about 20 feet behind him…The end result was Villanueva, hand on his heart and mouthing the words to the song, standing apart from his teammates. It was widely perceived, with sound enough logic, that he’d gone rogue…

This looks like a bona fide miscommunication, as other photo angles have shown Steelers players and personnel standing during the anthem just inside the tunnel, some with hands over their hearts.  Based on Villanueva’s account, he was urged by wounded vets to take a stand for the anthem, so he asked to alter the team’s previously agreed-upon plan to stay in the locker room — and then screwy logistics in the moment led to him standing alone on the field.  The guy feels like his actions unintentionally made his coach and teammates look unpatriotic, which was not his intention, so he’s expressing regret and clarifying.  I find it very hard to believe that a decorated warrior would be cowed or pressured into apologizing for doing something in which he manifestly believes quite strongly, so I trust his story.  It’s still rather dispiriting to see someone like Villanueva, whose intentions were pure, and who has literally earned the right to salute our flag and anthem however he likes, knocked onto the defensive over what he did.

By the way, Tomlin still doesn’t get a pass on this, in my book.  Even if he felt burned and frustrated over Villanueva and the snafu, he should have had the awareness and class to say something like, “I think there was a miscommunication within our locker room about how everything went down, and we’ll make sure we’re all on the same page in the future — but we obviously all respect the hell out of him, and we cannot thank him enough for his brave service to our country.  Watching him singing our anthem reminds us all what’s truly great about America.”  But that’s not what Tomlin did; he took some passive aggressive swipes about a lack of ‘respect’ and grumbled about a lack of unity behind the team’s decision.  Very low marks for misplaced priorities and poor leadership.

To be clear, Villanueva is not apologizing for standing up for the anthem — quite the contrary.  The whole reason he pushed for a shift in the team’s approach is because he didn’t feel comfortable hanging back in the locker room as the Star Spangled Banner was performed.  He’s a patriot.  His comments about respecting and defending the right to peaceful protest are also needed and pitch perfect.  So I’m not remotely upset that he wanted to explain the situation and defend his teammates.  I’m just peeved that the only person who seems to regret anything in this ugly, divisive anthem saga is the genuine hero who served three tours in Afghanistan, then sang along to the national anthem on a football field. As opposed to, say, the former player who wore socks depicting police officers as pigs.  It’s safe to say that most fans are squarely behind Villanueva.  Then again, his quarterback does seem to feel bad about the whole thing, too:

I was unable to sleep last night and want to share my thoughts and feelings on our team’s decision to remain in the tunnel for the National Anthem yesterday. The idea was to be unified as a team when so much attention is paid to things dividing our country, but I wish we approached it differently…As a team, it was not a protest of the flag or the Anthem. I personally don’t believe the Anthem is ever the time to make any type of protest. For me, and many others on my team and around the league, it is a tribute to those who commit to serve and protect our country, current and past, especially the ones that made the ultimate sacrifice…Moving forward, I hope standing for the Anthem shows solidarity as a nation, that we stand united in respect for the people on the front lines protecting our freedom and keeping us safe. God bless those men and women.

Throughout this tempest, Villanueva has come across as a stand-up guy who respects and loves both his country and his teammates.  Good on him for becoming an overnight inspiration to so many fans, as reflected in a big spike in his jersey sales — even if the game he plays is taking public relations and ratings hits as a result of these politicized spectacles.