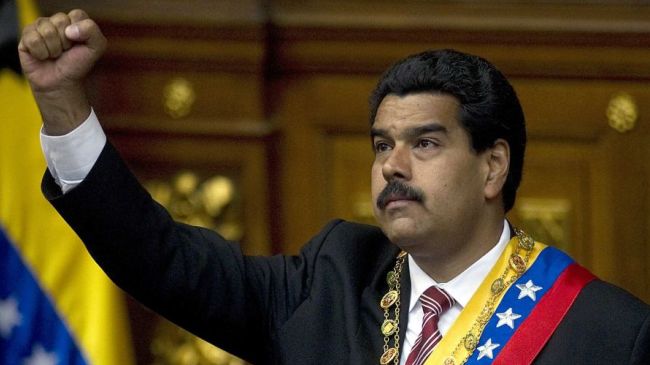 “Today, the United States is broadening its effort to address the ongoing assault on Venezuela’s democratic institutions by the Maduro regime,” Mnuchin announcced. “Treasury’s Office of Foreign Assets Control, OFAC, has sanctioned the President of Venezuela, Nicolás Maduro Moros.  As a result of today’s sanctions, all assets of Maduro subject to U.S. jurisdiction are frozen, and U.S. persons are prohibited from dealing with him.”

“As President Trump said earlier this month, the strong and courageous actions by the Venezuelan people to stand for democracy, freedom, and the rule of law have been continually ignored by Nicolás Maduro, who dreams of becoming a dictator.  Yesterday’s illegitimate elections confirm that Maduro is a dictator who disregards the will of the Venezuelan people,” he continued.

During the announcement, McMaster took things a step further by placing Maduro among the world’s most vicious leaders and compared him to North Korea’s Kim Jong Un and Syria’s Bashir al Assad.

Clashes in Venezuela continue and opposition leaders were taken from their homes last night by Maduro allies.

Venezuelan security agents arrested two key opposition leaders in a midnight raid on their homes, making good on President Nicolas Maduro’s promise to crack down on dissent following a vote that gave him broad authoritarian powers.

In the middle of the night, armed men took Leopoldo Lopez and Caracas Mayor Antonio Ledezma from their respective homes in the capital. The leaders had been highly critical of Maduro and had only recently been released from jail on politically motivated charges. The two, however, remained under house arrest.

The wife of Leopoldo posted a video on Twitter showing flak-jacketed agents bundling her husband into a vehicle marked “Sebin” — the name of Venezuela’s intelligence agency — and then speeding off.

“They’ve just taken Leopoldo from the house,” Lilian Tintori wrote in one tweet. “We don’t know where he is or where they’re taking him.”

The situation has been rapidly deteriorating over the past year as civilians struggle to find basic necessities. Hundreds of people have been killed in the streets after protesting Maduro’s regime.