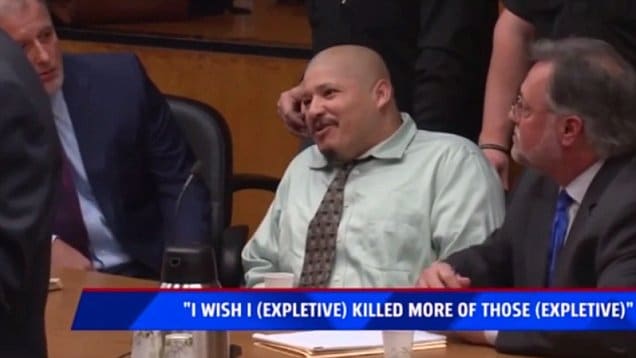 In October 2014 in Sacramento, Mexican national Luis Bracamontes, a repeat deportee and career criminal, gunned down police officers Danny Oliver and Michael Davis. The case reveals the failure of California’s ruling Democrats to recognize the violent racism of false-documented illegals.

After shooting Danny Oliver in the head with a 9mm handgun, Bracamontes attempted to commandeer the car of Anthony Holmes. When the African American Holmes refused, Bracamontes shot him five times. Holmes survived but Bracamontes also brandished the AR-15 rifle he used to kill Michael Davis, and he wounded another officer before being captured.

The murder of two police officers is a serious matter but the violent attack prompted no statement from California governor Jerry Brown or attorney general Kamala Harris. Both failed to lament the “gun violence” on display in the case.

In the early going Bracamontes admitted killing the cops but in his current trial in Sacramento he took it to a new level. “I wish I had killed more of the motherfuckers,” he boasted, adding, that he would “break out soon and I will kill more,” so “there’s no need for a fucking trial.”

Holmes testified that Bracamontes demanded “give me your car,” and when Holmes tried to flee “he just shot me in my head, in my ear,” taking other wounds in the hands. As he shot Holmes, Bracamontes wore a smirk on his face “just like he’s got right now,” Holmes testified.

In similar style, black lives did not matter to Mexican nationals Saul Isidro-Aucencio and Francisco Delgado. In 2011 the pair gunned down Jamir Miller, 15, Richard Ward, 16, and Robert Corpos, 20. Isidro-Aucensio used an AK-47 to shoot Miller in the head, and in court, Jamir Miller’s mother Melissa Jellison expressed anger that the murderers of her son were in the country illegally. Judge Helena Gweon, a Berkeley alum with a JD from Harvard, told the grieving mother “This case has nothing to with illegal aliens.”

The murders prompted no federal, state or local politicians to call for tougher border enforcement or more cooperation with federal law enforcement. That was also the case with the July 2015 shooting of Kate Steinle by Mexican national Jose Inez Garcia Zarate, a repeatedly deported career criminal. State politicians used the case to ramp up defiance of federal law, and have since taken that to a new level.

On January 1, California officially became a sanctuary state in which false-documented illegals, even repeatedly deported violent criminals, are a protected, privileged class. Governor Jerry Brown does his utmost to return already deported criminals to California, and to help other criminals avoid deportation. Assembly speaker Anthony Rendon sees no place for barriers between California and Mexico and prefers Mexico’s PRI regime to the U.S. federal government.

Aside from senate boss Kevin de Leon, California attorney general Xavier Becerra is the loudest promoter of the sanctuary law, which he enforces with an iron hand. Becerra not only shelters false-documented illegals from deportation but now threatens businesses with $10,000 fines if they assist federal immigration authorities.

Under the “Immigrant Protection Act,” which also kicked in January 1, employers must notify workers before a federal audit of employee records and cannot voluntarily share information without a subpoena.

“We will prosecute those who violate the law,” says Becerra, once on Hillary Clinton’s short list as a running mate. The state’s “top cop,” as the establishment media describe him, remains silent over the murder of police officers Danny Oliver and Michael Davis by Mexican national Luis Bracamontes.

When the cop-killer called Anthony Holmes a “nigger” and shouted at jurors that “black lives don’t matter,” that brought no comment from attorney general Becerra. Holmes, on the other hand was not going to remain silent in the face of racism.  As he finished his testimony, Holmes turned to Bracamontes and told the Mexican, “Fuck you.”

Californians could be forgiven for saying the same thing to ruling-class Democrats who turn a blind eye to violent criminal racists and protect false-documented illegals from deportation. Holmes’ brave resistance to the cop killer also sets a strong example.

If police get in gun battle with a criminal illegal, they should shoot to kill. That way, as Luis Bracamontes said, “there’s no need for a fucking trial.” On the other hand, many citizens might agree, there is a need to keep racist murderers like Luis Bracamontes out of the United States of America.