My name is Laura Loomer. As many of you may have heard, I was permanently banned from Twitter for life on November 21, 2018, and then I was banned for 30 days from Facebook less than 24 hours later, in another example of collusion by tech giants to censor conservative voices.

What was my offense?

Did I spew hateful, violent rhetoric towards anyone as we frequently see leftist celebrities and politicians do online?

Did I post racist comments or call for genocide against a group of people?

Did I incite a riot or call for the President to be assassinated, like Leftists often do on Twitter?
Nope.

I merely shared a fact. Yes, the truth can now get you banned for life from the Internet, in America, the land of the free, and the only country with a First Amendment right.

The tweet that Twitter decided to ban me for was a tweet full of facts about Sharia law. It was a tweet directed at Ilhan Omar, a newly elected Congresswoman, a politician, a public figure, which pointed out that her support of Sharia law does not make her an ally for gay people, women, or Jews, as Twitter would like you to believe.

This is the tweet that earned me a lifetime ban. Is this “hateful conduct,” as Twitter accused me of practicing? 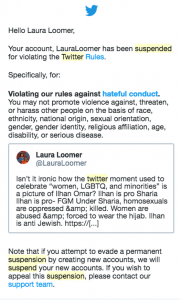 As a journalist, I always ask questions and seek the truth. As an American, I have been granted free speech protections under the First Amendment to express myself as a citizen; and member of the press. 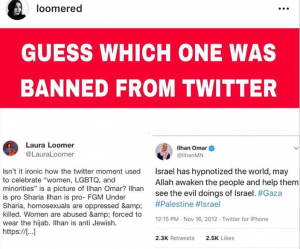 Given that Ilhan Omar is one of the first two Muslim women elected to Congress, and given that her use of Sharia in her own life through the hijab was a recent national debate that resulted in a Congressional rule change regarding headwear in Congress, all of my comments and questions are relevant. My tweet was not malicious. It was not hateful, but even if it was, the First Amendment in this country allows me to say it, no matter how offensive it may be to some.