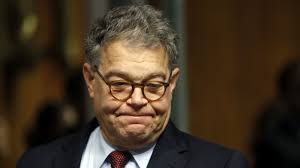 When two new women came forward to accuse Sen. Al Franken of inappropriate touching, the Minnesota Democrat issued a Thanksgiving day statement in which he doesn’t apologize, but instead says the women have got it all wrong for “feeling badly.”

“I’ve met tens of thousands of people and taken thousands of photographs, often in crowded and chaotic situations. I’m a warm person; I hug people. I’ve learned from recent stories that in some of those encounters, I crossed a line for some women — and I know that any number is too many.

“Some women have found my greetings or embraces for a hug or photo inappropriate, and I respect their feelings about that. I’ve thought a lot in recent days about how that could happen, and recognize that I need to be much more careful and sensitive in these situations. I feel terribly that I’ve made some women feel badly and for that I am so sorry, and I want to make sure that never happens again.

“And let me say again to Minnesotans that I’m sorry for putting them through this and I’m committed to regaining their trust.”

But let’s back up. The two new women — which now brings the total to four — say Franken grabbed their rear ends, the HuffPost reported. One said the Democrat groped her when they posed for a photo after a June 25, 2007, event at a women’s political caucus; the other said Franken cupped her butt with his hand at a 2008 Democratic fundraiser in Minneapolis — then suggested the two visit the bathroom together.

Now, back to the statement.

First he cites “crowded and chaotic situations” to, what, imply that sometimes inappropriate touching happens? But then he says: “I hug people.” On their buttocks? But then he adds that he’s “learned” that he “crossed a line” in some encounters — like, the ones in which he grabbed women’s buttocks?

But he doubles down with the weird excuse. “Some women have found my greetings or embraces for a hug or photo inappropriate … ” Now wait, are those the “embraces” where you grab their buttocks, ‘cuz, yeah, that’d be inappropriate. Of course, you’re only 66 years old and still learning, so perhaps you just didn’t know that.

He’s thought a lot about that in recent days, he said (only after reports that he regularly sexually assaults women — and for the record, the “inappropriate” touching Franken refers to is also known as “sexual assault”). And this is what the brilliant comedian came up with: “I need to be much more careful and sensitive in these situations.”

What on earth does that mean?! How would his being more “sensitive” help? Are there some women who would be cool having their privates groped? Are there some times, some events, where a little grope isn’t so bad? (Not, say, a women’s caucus, but maybe a county fair?)