Alyssa Milano joined the majority of the media in prematurely making assumptions about the Covington Catholic School incident. 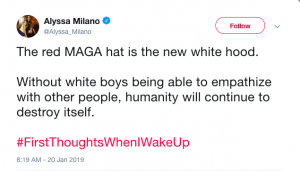 Insinuating that “white boys” are President Trump’s sole supporters, Milano places blame (for everything) at the feet of Caucasian men. The MAGA hats – representing everything Trump campaigned on – she compares to white hoods of the KKK. Known for wearing white robes and hoods while burning crosses, the extremist KKK made exterminating the black ethnicity in America a main objective.