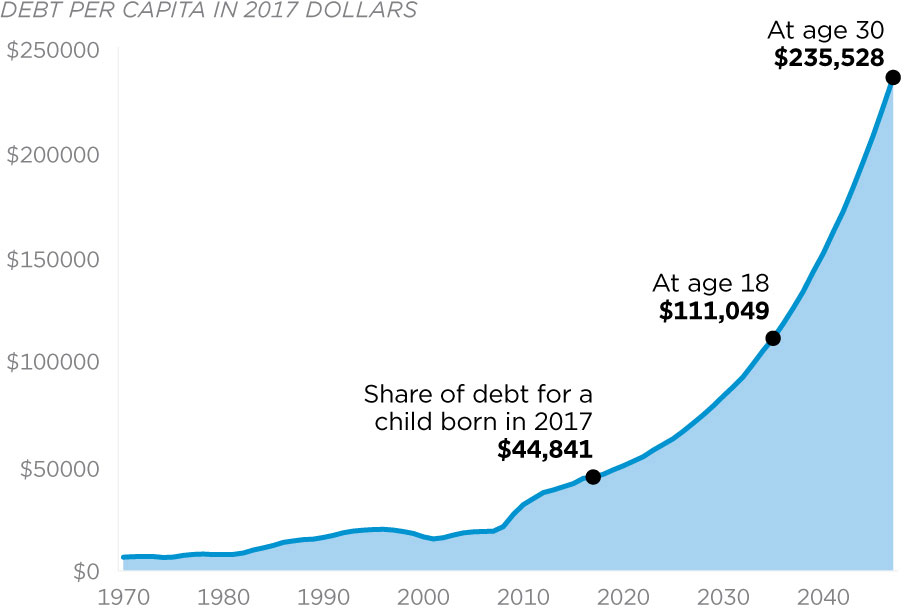 In the looming shadow of another debt limit debate, Congress should stand firm and demand spending controls before increasing the debt limit again.Most people are familiar with the tragic story of the Titanic. Like the iceberg that sank the grand ship, the United States is facing what is perhaps the largest and most avoidable crisis in its history—the U.S. federal debt.

The crew of the Titanic chose to ignore warnings of the danger ahead. Congress must not fall into the same trap.

Between today and 2047, the only areas of spending expected to increase as a percentage of gross domestic product are Social Security, major health care programs, and interest on the debt.

These are the drivers of the national debt. All other spending is projected to decline as a percentage of GDP, and revenues are projected to rise as well. Entitlement spending is the problem.

These projections assume no wars, no terrorist attacks, no recessions, and historically low interest rates. If the country faces war, economic crisis, or other major unforeseen events, it would put further strain on the budget and likely accelerate the growth in debt.

Why isn’t Congress taking the federal debt seriously? Participants in a panel discussion on the costs, causes, and consequences of the government’s unconstrained spending habits think that the blame falls on a lack of motivation.

“I think it’s a lack of incentives for policymakers that they prioritize short-term thinking over long-term thinking,” David Barnes, policy director at Generation Opportunity, remarked during a Heritage Foundation panel last month.

“[Lawmakers] prefer to get something today,” he went on to state, “and put off a tough decision until later.”

A child born in 2017 will have a $44,841 share of America’s publicly held federal debt. As the chart below illustrates, that amount is projected to grow more than five times in the next 30 years as federal deficits continue to exceed expected population growth.

The consequences of Washington’s excessive spending will manifest in several ways.

For one, such a massive federal debt stifles economic growth. Interest rates could rise more steeply, either at the behest of creditors seeking protection from the risk associated with investing in a country with an unsustainable debt trajectory, or simply because the government is attempting to sell more bonds than people are willing to buy at current rates.

Regardless of the pathway, higher interest rates would raise the cost of debt and lead the government to either tax more or borrow even more money.

According to the Congressional Budget Office, a large amount of federal debt will also restrict the government’s ability to use tax and spending policies to respond to unforeseen circumstances, such as an economic downturn or financial crisis.

As a result, those unexpected challenges could have a much larger negative impact than they otherwise would have.

It is also important to note that increasing levels of federal debt threaten national security.

As major entitlement programs and payments on interest from the debt continue to consume a larger portion of federal spending, other programs, such as defense, have faced significant cuts. Already underfunded and ill-prepared, the U.S. military needs more funding, not less.

All of this could be avoided if lawmakers committed to reducing spending.

Younger generations will bear the brunt of the consequences in the future from the damage being done today. Taxes would be higher, income levels would be below their highest potential, additional debt would be more expensive, and the economy could further stagnate—unless Congress acts and acts soon.

While the fiscal storm brewing over Washington is more ominous than ever, it is not too late to change course. Lawmakers must address their excessive spending habits now.

Through the implementation of responsible policies such as the ones outlined in The Heritage Foundation’s “Blueprint for Balance,” lawmakers can set our nation on a fiscally responsible path.

Cutting spending requires difficult decisions, but the cost of inaction is that much higher.