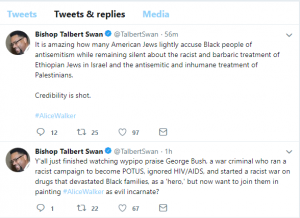 Just like Farrakhan and the Women’s March, when you expose racism, you also expose the folks who rush out to defend it.

The context is Alice Walker’s anti-Semitism becoming a public topic of discussion, even though it had been well known for a while.

Walker, the ADL statement went on, “suggests that Israeli settlements are motivated by the concept that ‘possession is nine-tenths of the law,’ which she claims is a lesson she ‘learned from my Jewish lawyer former husband. This belief might even be enshrined in the Torah.’”

A meeting she describes with an elderly Palestinian woman in the territories is telling about the impetus behind Walker’s hostile attitude towards Jews and Israelis. The woman, upon accepting a gift from Walker, says “May God protect you from the Jews” to which Walker responds, “It’s too late, I already married one.”

Defending her on Twitter most vocally was Bishop Talbert W. Swan II, who had been previously banned from Twitter for aiming a racial slur at Candace Owens. Twitter bowed to lefty pressure and let him back where he’s been inveighing against Israel