Mitt Romney’s announcement that he will vote on President Trump’s nominee to replace Ruth Bader Ginsburg on the Supreme Court “based on their qualifications” is getting plenty of media attention. But for some reason, Alaska’s Lisa Murkowski’s much more surprising announcement that she can’t rule out voting for a nominee, reversing her position last week that she would not vote on a nominee before Inauguration Day, is getting no MSM attention at all, according to Google: 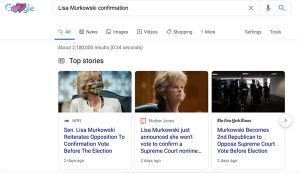 “I know everybody wants to ask the question, ‘will you confirm the nominee?’” she said outside the Capitol, as her Republican colleagues were gathering for their weekly policy lunch. “We don’t have a nominee yet. You and I don’t know who that is. And so I can’t confirm whether or not I can confirm a nominee when I don’t know who the nominee is.”