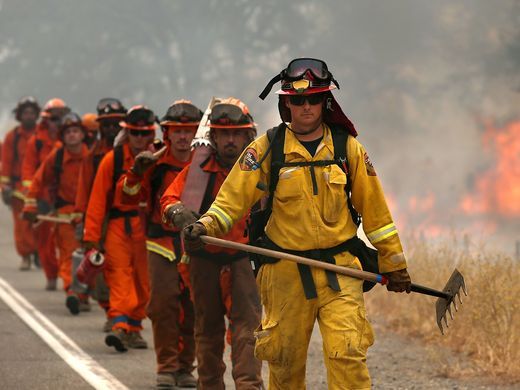 Arizona is letting inmates out of prison to fight fires, and now it wants to help them turn that experience into a career.

After successfully using work-release inmates to fight fires, Arizona will now spend $1.5 million to create a professional ex-con fire crew, Gov. Doug Ducey (R-Ariz.) has announced. “I want it to be easier for individuals released from prison to stand up and protect their communities,” Gov Ducey says in a July 7 opinion piece for Tucson.com:

“That’s why the new state budget I signed a few weeks ago is investing $1.5 million to create a post-release fire crew. (The existing program enlists current inmates; the new program enlists released inmates.) We’re giving Arizonans a real second chance to turn their lives around in a meaningful and productive way.”

This new program not only reduces recidivism, but also “protects taxpayers from long-term prison costs, and it improves public safety,” Ducey says:

“Taxpayers already give enough of their hard-earned money to government.”

The inmate work-release firefighting program is voluntary. Among the eligibility requirements, inmates must:

Be eligible for Level 1 or 2 work supervision.

Have no escape history or arson convictions on their record.

Have a sentencing structure allowing them to be available throughout the fire season.

“It was one of the best decisions I’ve ever made,” said Fort Grant Wildland Crew squad boss Mark Harper. “To put it bluntly, it’s been a life-changing experience for me. I know a lot of the guys out here feel the same way,” inmate Harper said in an interview in April of this year.

Arizona needs all the firefighting help it can get, as it is suffering through a particularly difficult fire season this year, Gov. Ducey said Friday in a statement commending the state’s emergency responders for their efforts to suppress two major ongoing fires:

“Eleven percent of the Burro Fire has now been contained as a direct result of our firefighters’ and first responders’ hard work and preparation. The Goodwin Fire, which has burned more than 28,000 acres of land, is now more than 95 percent contained.”