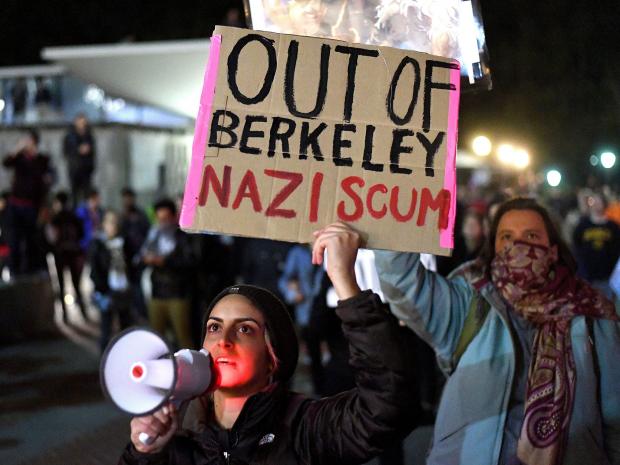 Despite the cancellation of the “Free Speech Week,” which was allegedly going to star Milo Yiannopoulos, Ann Coulter, and Steve Bannon, a bunch of social justice activists converged on Berkeley to protest anyhow. So YouTube personality Fleccas, real name Arthur Fletcher, arrived on the scene to learn firsthand what all those outraged activists were specifically protesting. By the end of the day, Fletcher came to the conclusion that a vast majority of them don’t really know and even fewer are able to defend their incoherent political positions.

“Stop laughing at her!” yells another protester to someone who apparently couldn’t hold in a few laughs at the over-the-top accusations.

“This is a Neo-Nazi recruitment rally that you guys are protecting,” another female protester says to law enforcement. “They are openly trying to recruit fascists.”

The first guy Fletcher interviews accuses the police, who are there trying to keep order, of “promoting hate speech,” despite the fact that the “fascist” free speech rally was actually cancelled.

After that leftist dystopian fiction-based explanation, a young male protester tells Fletcher matter-of-factly of right-wingers(?), “Well, they’re pro-misogyny.” Asked to explain how exactly they are “pro-misogyny,” the protester says, “By being pro-misogyny. By espousing pro-misogyny rhetoric, right?”

After assertively declaring that she does not agree with President Trump’s views, a female protester wearing white sunglasses can’t seem to remember a single thing he’s said that she disagrees with exactly. “I think he’s just…” she begins, then shrugs. “I can’t pick out a quote in particular…” she says.

When asked by Fletcher why he doesn’t like Trump, one Hispanic protester answers, “F*** Trump!”

Fletcher turns to the camera and says, “I totally agree. If the cops thought fascism and Nazis were rising in the United States, they would turn around and stop it.”

In perhaps the most revealing moment of the entire video, Fletcher drops in on a crowd of leftists chanting “Nazi scum!” at a guy. Fletcher is eventually able to figure out who the target of their anti-“Nazi” chant is: It’s a man wearing a MAGA hat.

“That doesn’t make any sense then,” says Fletcher.

“Yesterday, they called me a white supremacist,” says the Indian Trump supporter.

One particularly hilarious exchange comes when an “anti-fascist” announces that “Every white supremacist in the country supports Donald Trump.”

After a pause, the anti-fascist says, “I would argue the Black Panthers are way better than the KKK or any white supremacist.” He goes on to estimate that a “large amount” of Trump’s base is the KKK.

By the end of the video it’s abundantly clear that a whole lot of the leftist activists believe that subjectively defined “hate speech” is not protected by the Constitution, uncritically believe wild, unfounded accusations about basically everyone on the Right, and ultimately don’t really know what they’re angry about.