Republican Martha McSally was ahead Tuesday evening when the polls closed, but the Democrats produced tens of thousands of ballots out of no where post election. 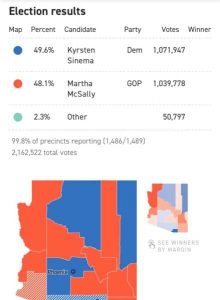 As TGP previously reported, Taliban sympathizer and ‘anti-war’ activist Kyrsten Sinema expressed her utter disgust with Arizona in a speech given in March of this year.

Sinema was a radical Code Pink activist before entering politics and once led a far left group that portrayed US soldiers as evil killers who were waging terrorism in the world.