California was a lost cause in voting for the president, but there was still a little bit of good news.

Proposition 16 failed, by a huge 56% to 44% at last count margin, smacking down yet another effort by the state’s far-left elites to foist affirmative action labeling onto California’s diverse population.

Here’s what Google had on its results (it doesn’t link to anywhere) on a keyword search for ‘Proposition 16 results,’ citing the Associated Press:

Which is a huge repudiation. 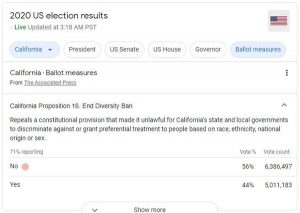 A big reason, of course, is that California has a large Asian-American population, and very large numbers were aware that any newly instituted affirmative action spoils system was going to come out of their hides. I wrote about that here. Work your hardest to win some prize, watch it handed over to someone else who has the ‘right’ color of skin as their main merit.