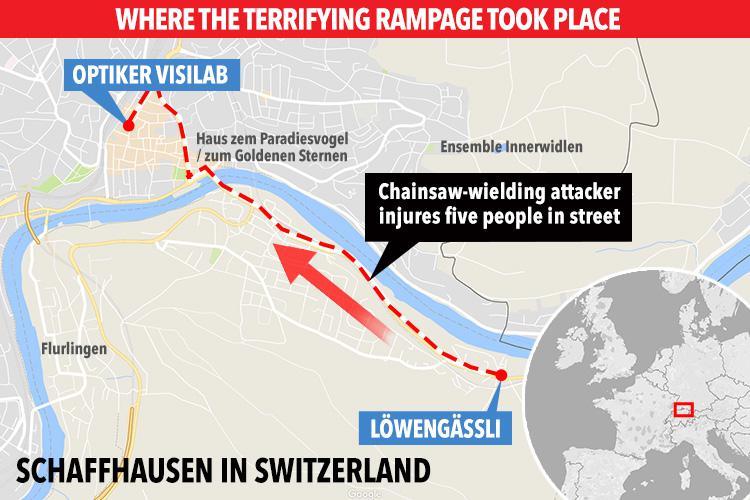 A CHAINSAW maniac who injured at least five people in Switzerland this morning targeted a health insurance firm before fleeing, police have said.

He stormed into the offices of the CSS-Krankenkasse in the town of Schaffhausen, injuring two employees before taking his attack onto the street.

The main suspect, named as 51-year-old drifter Franz Wrousis, is accused of then assaulting at least three others before making off in a white VW Caddy. 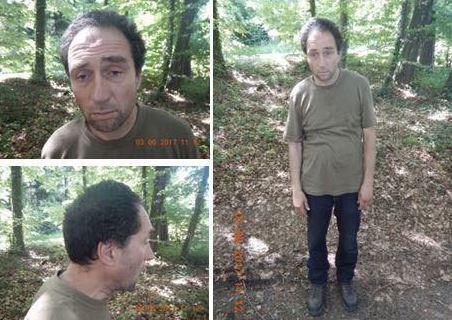 One of the five injured victims is being treated for serious but non-life threatening injuries.

Footage shows panicked shoppers watching in horror as armed cops sealed off the town centre just after 11am.

Local news site Blick reported accounts from locals saying an elderly man with severe head wounds was rushed in an ambulance to hospital.

A shoe shop worker said one of their customers was among the injured, adding: “Nobody can leave the stores anymore.”

Schaffhausen police are leading a massive manhunt after confirming they were responding to a “special situation” — but ruled out a terror motive.

A theory has emerged that the attacker was insured by the company which refused to pay out for certain procedures under the terms of his policy.

Wrousis was most recently living in a forest near Uhwiesen, less than two miles from Schaffhausen, where investigators this afternoon found his abandoned VW van.

Police said he can act “aggressively” if cornered and warned the public not to approach him.

The chainsaw used in the attacks has not been found and police said he could be carrying other weapons.

Witnesses said the attacker rampaged through the centre of the town and was last seen near an opticians.

Around 100 officers including counter-terror specialists and reinforcements from neighbouring districts have been drafted in to aid in the search.

Helicopters have also been deployed above the northern town, which lies on the border with Germany.

“We have been alerted and therefore assume there are injured people,” a spokeswoman said.

“The police completely sealed off the old town. More and more policemen are coming”, a resident told Blick.

Authorities have warned people to avoid the town centre and remain vigilant.