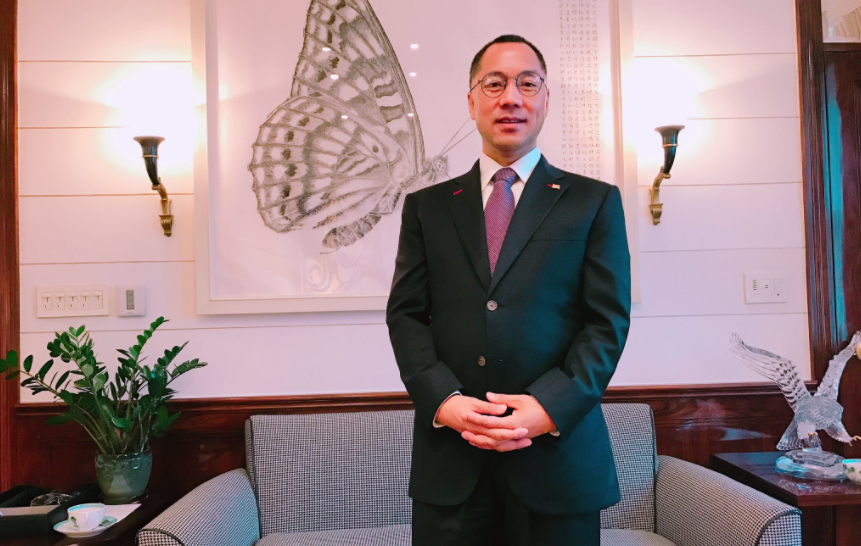 A dissident Chinese businessman who revealed corruption among senior Chinese leaders and information on Beijing’s spy networks has applied for U.S. political asylum.

Guo’s lawyer, Thomas Ragland, said the asylum application is based on the fact that the businessman’s charges against Chinese officials made him a political opponent of the Chinese regime.

The average time to process an asylum claim is two to three years and during the period will address issues, including the accusations made by the Chinese government, he said in an interview.

“I’m confident he has a strong claim and he will ultimately be granted asylum because it’s a legal decision based on the facts and the law and not on politics,” Ragland said. based on the law and the fact.

The asylum request followed what Guo said were death threats against him and his family as well as a recent electronic hacking incident that temporarily disabled his yacht, nearly causing a collision on the Hudson River in New York.

Guo, who uses the name Miles Kwok, also recently learned from sources in China that he has been declared a major threat to that country. The notification was made in an internal document produced by the National Security Council in Beijing, a government body composed of security and intelligence officials and Communist Party leaders.

The document states that Guo poses a greater threat to China than the pro-democracy demonstrators who occupied Beijing’s Tiananmen Square in 1989. The demonstrations were brutally suppressed after Party leaders called in Chinese troops. The U.S.-based dissident Chinese news outlet Mingjing News first reported the Chinese document.

Guo was a confidant of Vice Minister of State Security Ma Jian, who for decades directed Chinese intelligence operations against the United States before running afoul of Communist authorities. Ma was imprisoned last year on corruption charges viewed as political retribution for spying on Chinese leaders.

Ma was a source for some of the allegations of corruption leveled by Guo against Wang Qishan, one of the seven most powerful communist leaders in China. Guo told the Washington Free Beacon in July that the anti-corruption czar secretly turned a $30 million real estate investment in California more than 30 years ago into an estimated $2 to $3 billion today.

Guo’s bid for political asylum is a setback for the Chinese government’s efforts to force Guo into returning to China to face criminal allegations.

China does not have an extradition treaty with the United States. However, Hong Kong does have such a treaty and China is believed to have sought to invoke that treaty in seeking Guo’s forcible return.

Two Chinese security officials traveled to the United States in May as part of a Beijing effort to pressure Guo into keeping silent and not disclosing secrets about corruption among senior Chinese officials, as well as details of intelligence activities.

The officials were identified as Sun Lijun, vice minister of the Public Security Ministry, and an aide, Liu Yanpang, and came to Washington to discuss cyber security. The officials also pressed the Trump administration to forcibly repatriate Guo back to China.

During the visit, Liu traveled to New York, where Guo lives, and was detained by the FBI for violating the terms of his visa. His cellphone and laptop were confiscated before he was allowed to return to China.

The decision to seek asylum followed months of consultations with U.S. officials, including representatives of the FBI and CIA, a person close to Guo said.

In the video, under the title, “The Viciousness of Sun Lijun, Meng Jianzhu, Fu Zhenghua, and Wang Qishan Prompted Guo Wengui to Make the Decision to Seek Political Asylum,” Guo said he could have opted for several avenues. Meng is a Party Politburo member and Fu is a vice minister of public security.

One option was to seek a special S-Visa that is used to grant asylum to defectors and informants. Another route to asylum would have been the use of special presidential power.

Instead, Guo said he chose to pursue the conventional route used by those who face political persecution: applying for asylum through the Department of Homeland Security’s U.S. Citizenship and Immigration Services. The process involves filling out an application for asylum and for withholding of removal, and began Sept. 6.

However, the notice is suspect because Interpol’s current president is Meng Hongwei, a Chinese Public Security Ministry official appointed in November.

Guo dismissed the charges as false and politically motivated by Chinese leadership seeking to silence him through threats, intimidation, and pressure on business associates. Guo has been targeted for assassination, according to a person close to him.

“[The Chinese government] used the most vicious and most immoral means to attack me,” Guo said in the video, according to a translation.

“They represent the country! They are acting in the name of the country. Wengui’s exposé [of the communist leaders] are the greatest activity in history. Under the circumstance, I am protecting myself one hundred percent.”

Guo said he is worried that someone might make an issue of his political asylum. “An American government official talked to me seriously. He said, ‘America is a nation of law. No one has the special privilege to decide other people’s fate. We want to wrap you up with the American flag,'” he said.

“I was very moved. Very moved! I burst into tears. My own country wants to hurt me, and is going to destroy me and my family with all means. Compare to it, the American government officials told me that they did not demand materials and information from me, and did not ask me to do anything as a condition. They just want to ensure my safety and pursue justice. … At that moment, I realized that how great America is.”

A U.S. official said the case against Guo is not a legal matter. “This is a political case,” the official said.

Since earlier this year, Guo has been posting regular videos discussing corruption in China and other issues.

He has amassed a following on Twitter of more than 400,000 followers and in China his broadcasts and posts are heard and seen by tens of millions of Chinese.

Guo has become a hero in China to the millions of Chinese who are seeking democratic reforms and an end to widespread corruption among the ruling elite.